Graham,
Don’t forget the DE36 limousine that also participated one year, apparently overtook many teams in the snowy conditions, the weight and stability of the car “parting the Red Sea” so to speak!
Peter Grant
Top

I didn’t know that Peter!
Is it Daimler Days?
Quite a barge to take over mountain passes not to mention the fuel used.
Graham Emmett
Northwich, Cheshire
Joint DB18 Registrar (with Marcel Renshaw)
DB18 1949 LCV522 (Yes that one with the P100s)
https://www.db18.org
Top

They made it Doris the Daimler completed route to Monte Carlo from Glasgow. Well done
Photo credit Robert Grounds (Coequipier) 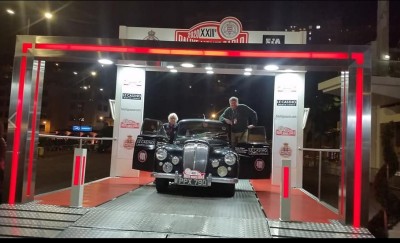 It doesn't look very dirty, I suppose they've had time to give it a wash. Any problems on the rally?
Who's who in the photo? Which is our Administrator, Peter Baker?
A fantastic effort. 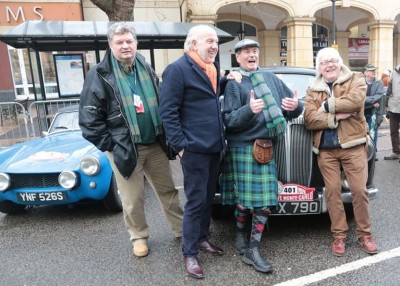 What a result! And the car will be on our stand at the NEC in March

Apologies for coming to this posting late, may have already been covered before, but there is a nice picture of CHH914 (Gault/Collins) Daimler at the start of the 1955 Monte in Glasgow on Bill Henderson site www.thebillhendersoncollection.co.uk the Daimler is one of a selection shown for that year, but the whole collection has some 8000 scanned images on it according to the site, and I am sure there are other Daimler images that may be of interest. I contacted them a few years ago and through his son obtained permission to use a photograph of the 1951 start showing a Lagonda 2.6 for inclusion in the Lagonda Club magazine.

Excellent I will check it out thank you
Graham Emmett
Northwich, Cheshire
Joint DB18 Registrar (with Marcel Renshaw)
DB18 1949 LCV522 (Yes that one with the P100s)
https://www.db18.org
Top
Post Reply
20 posts