Hi Chaps, having completely reconditioned the engine in my Lanchester LA 11, earlier this year, I am somewhat dismayed to find that I She seems to be starting up on Three Cylinders occasionally.
It usually occurs having not been started for Two or Three days, and only on No 2 Cyl , I have noticed slight streaking down the Cyl Block along the Head Gasket , seem that coolant and is maybe permeating either through, or creeping either side of the Head Gasket on either side of the Engine . Yes the cooling system does contained Blucol antifreeze, which probably aggravates the situation!
I do have another fully reconditioned Cyl Head ready to be fitted , and a complete set of Gaskets , so the reason for this diatribe is, what sealant would the “Team” recommend I apply to the mating surfaces ?
I should say that the Head that is currently fitted Did show signs of very slight leakage over the central Exhaust Port when pressure tested, this was halted with the application of Super Glue would you believe.
Hence my wanting to fit a replacement Head .
Your observations / suggestions would be most welcome

Blue Hylimer. Excuse me if the spelling is incorrect.
Colin,
I may be slow but I’m rough as well !
Top 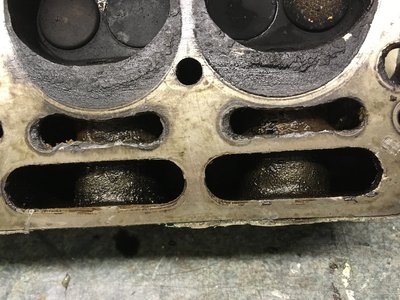 Hi.colin, yes that what I usually use , just thought that I would sound around in case there was a better product,
Anyway, got home from playing Bowks all day, and decided that it was no good ignoring the problem with my engine, as I have a wedding to do for a friend, and am also driving up to take part in the Goodwood Revival so really did no wish to wing it and hope for the best!,
So decided to remove the Cylinder Head, we that was where the problems started, having removed everything that need to come off , tried to lift the Head off, well about 3 hrs later it finally secumbed to plain brute force and ignorance , using a large lump hammer and several wedges, which is Not the way I prefer to work!!
It turned out, that the Head had seized onto one of the Head Studs , just could not believe how much force I had to use to lift that damed Head!
On examinating the Head, it became clear the reason for the leakage into No 2 Cyl.
The holes in the Cylnder Head , had suffered from excessive corrosion ( See pictures) and seen by the “Witness” marks on the Head, that the Head Gasket was only marginally covering some of the Water way holes .
The last picture is of the replacement Cylinder Head that has been completely reconditioned . 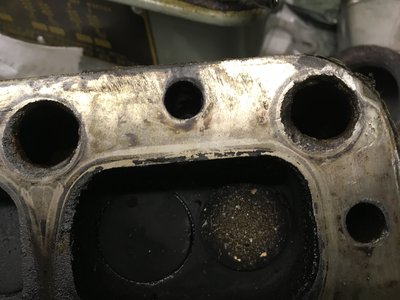 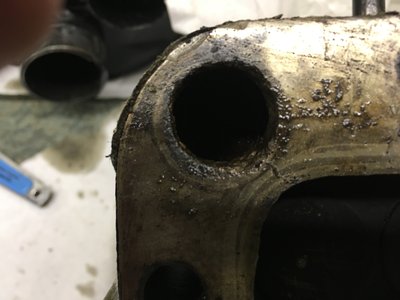 Just got to put her back together now !