I need a set of new tyres for my Special Sports, any recommendations out there, seems there are quite a few brands and differing prices. I want to keep with cross ply tyres i think?

Once you buy them, you’ve bought them so you can’t complain !

Hi Eric,
We do quite high mileage here in Australia and some years ago Coker 600 x 16 inch vintage radials were recommended for my Special Sports.
They are not cheap, but they have proven to be a fantastic compromise between the wobbly cross ply tyres that I had on the car for years and modern radials which i fitted and absolutely hated.
I think they retail here at about $500.00 Australian per tyre.
A fellow owner, now sadly deceased had replaced his Cokers (he had worn them out) with cheaper cross ply tyres and he hated them and had all sorts of problems with vibration and road noise.
At the end of the day, bearing in mind your likely use of the car and how you drive it, you do get what you pay for.
Cheers and good luck with your choice.
Peter Grant
Sydney Australia
Top

Agree with Peter, Cokers have been vg for me. 35 psi all-round.

Just out of interest, are those tyre brands via Blockley Tyres ??

Google Coker tyres UK and you will find them, heck of a price, well over £1,000 for four, but they are available. Syd
Top

Blockley Tyres is a make of tyre. He manufactures them to his own specifications and only sells his own tyres. He doesn't sell any other makes.

Yes you can! Blockley offers a money back guarantee if you are not satisifed https://www.blockleytyre.com/page/block ... ny-origins
Top

Coker 600/16 radial from North Hants Tyres. They also do a Stahl Radial in the same size, a bit more expensive.

I've got Blockleys on my car and have been very pleased with them, but the 5 stud pattern on the 600/16 crossply might be a bit too vintage for your car. Longstone have a good selection of 600/16 as well, some of them quite cheap. I would recommend you check the overall diameter of any potential choice - I found there was a huge difference, and the Blockleys on my car replaced a set of Lesters which were a full 2cm less in diameter, making the car look and feel very 'undertyred'. This affects gearing and revs. I've attached a pic showing the difference - the Blockley is based on the old Pirelli Stella Bianca (now reintroduced and sold by Longstones) which looks good on the car, and was sold from the mid Thirties into the Fifties I think. If you compare the Coker and Stahl for example, the former is quoted at 683mm overall, and the latter at 711. That's quite a difference for tyres nominally of the same size. 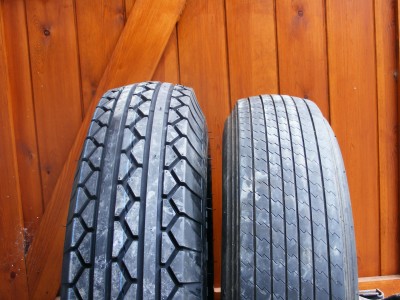 marchesmark wrote: ↑
Sun Apr 07, 2019 1:23 pm
If you compare the Coker and Stahl for example, the former is quoted at 683mm overall, and the latter at 711. That's quite a difference for tyres nominally of the same size.

I think you'll find that one of those has an aspect ratio of 80 and the other 100, i.e. the sidewall is either (nominally) 80% or 100% of the section width. That would account for the difference.
Top
Post Reply
13 posts