I should have been doing this months ago as part of my top end and cylinder head overhaul but "life" has got in way as is sometimes does!

Before I refit the manifolds to the heads prior to refitting to block I would like to replace all the studs at the 4 hole (stud) flange, they are not so bad as they look and the nuts pull up ok on the studs when tightened against something solid placed in-between, however it would be a shame not to do the job whilst I have the manifolds on a well lit and comfortable bench, could also save having to remove the heads again should they indeed fail now or in the future!

Two nuts locked together in an attempt to simply unscrew the studs are clearly not going to bring any success, so I thought about cutting the studs off almost flush with the flange, carefully and accurately center punch the stud then start drilling out with cobalt drills until a tap can be used either re-cut or clean old thread when hopefully the remains of the old stud are pushed through the other side of the flange. This, I hope!, may well be possible when the nominal min diameter of the stud has been reached or almost reached following careful and accurate drilling!! Or are the studs too hard to drill? Unlikely if a thread has been cut on them!

Plan B is to attempt to remove/unscrew the studs using a "Stilsons" wrench following heating of the flange and gentle tapping with hammer to try and loosen rust, corrosion etc in the threads, if this fails I can still resort to drilling out. What concerns me with this method is the possibility that a corner of the flange could break off? There are cast iron I believe?

Anyway, enough of the waffle, thanks for any ideas or experience? 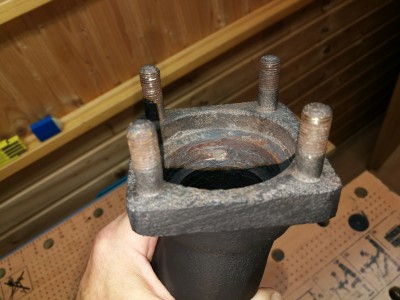 I have just done this job on my V8 saloon manifolds and although time consuming it was worth the effort.

Like you the threads on the studs were acceptable, but always up for a challenge I decided to renew them.

1- all the studs were soaked with Plus Gas which as you know is a rust breaking fluid it really does do the job. I sprayed the 8x studs on and off for a day letting the fluid seep in to the actual threads.

2- the following day I set-up the double nut option and gently heated all 4x studs at the same time to ensure a spread of heat rather than centred on a particular corner / stud.

3- with the manifold hot but not volcanic I was able to remove each of the studs in turn without much bother.

4- there is no doubt that use of the Plug Gas (which I swear by) was the key factor here.

5- with the studs removed, I cleaned up the threads and refitted new studs with the addition of Copperslip.

6- with that done, the manifolds were sprayed in matt black with Simonize VHT manifold paint rated at 850C

The other alternative is to clean the threads (provided you are happy with them) with the appropriate die of the correct thread pitch; this will re-establish a definite thread on the studs.

One point I would flag, is do not waste your time using WD40 to try and free the studs you will be there forever, as it is a water dispersant (hence the lettering) and NOT a rust breaking liquid. 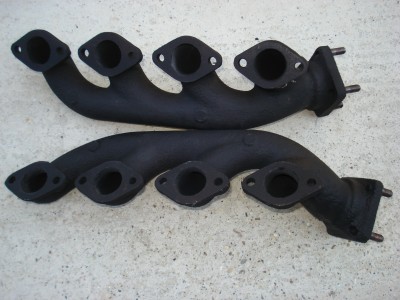 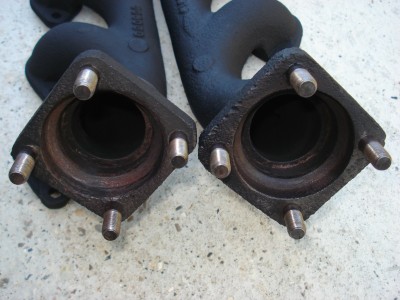 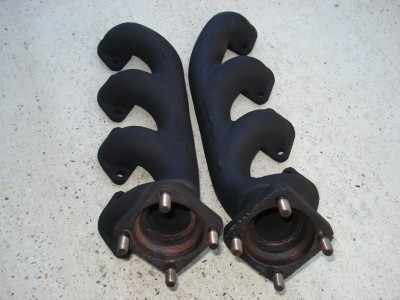 Very smart Richard. Where did you buy the studs? I’m trying to source the 16 which hold the half shafts casing to the diff on a DB18.
And I take your point on PlusGas but you just don’t see it these days.
Graham Emmett
Northwich, Cheshire
Joint DB18 Registrar (with Marcel Renshaw)
DB18 1949 LCV522 (Yes that one with the P100s)
https://www.db18.org
Top

Not sure, but I have a box with loads of these in - new and good used; may even have scooped them up from an autojumble as a job lot.

Have you got the thread size and is your stud a mix of UNC and UNF - what is the overall length and also each of the respective thread lengths ??

Thanks for the info Richard.

I have already cleaned up and removed rust and foreign material as far as possible where the studs enter the flange on both sides and have started the soaking in an over here equivalent of Plusgas, a combination of release agent and "freeze spray" which I have had some success with over the years, but I have ordered some Plusgas and its on its way.

I have lots of time to let it soak in and hopefully "do it's stuff" as I start a 4 week training course tomorrow and won't have any time for matters regarding heritage motoring!

A question regarding how you heated up the flange, what did you use?
Is a plumbers brazing/silver soldering torch powered by a gas canister sufficient to apply the necessary heat to the flange or is it necessary to call up the "heavy artillery" in the guise of an oxy / acetylene welding torch and apply the heat judiciously? I am fortunate that I have access to both.

I used a plumbers torch with a medium heat and gently heated the flange evenly - the double nuts were already in situ.

You will get a bit of smoke form the embedded Plus Gas, but to be expected and no fire hazard.

As soon as I pulled the torch away I then tackled the double nutted studs.

Finally got all the studs replaced, no luck with heating up to 520°C+ and trying to unscrew, they started to twist within themselves like a "Barley Twist" sweet from years ago!!

I had to resort to very accurate centerpunching and careful drilling out and finally retapping. The stud material seemed to be very soft which may be the reason it all seemed to have melted into one with the manifold! Here's how to do it if anybody out there now or in the future needs to do the same. Secret is in the preparation and patience! 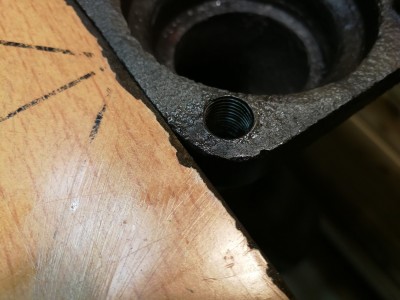 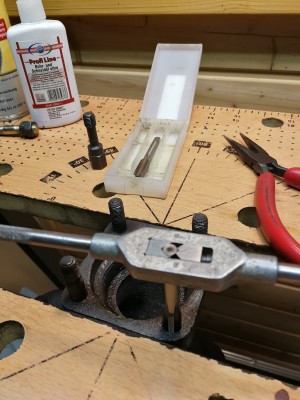 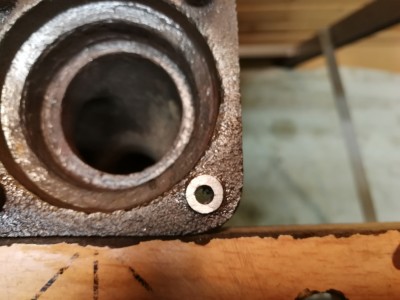 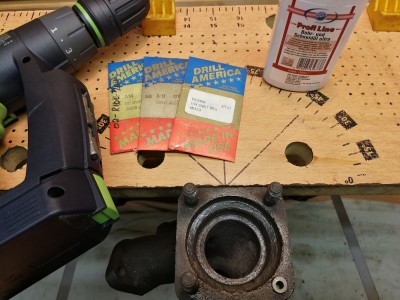 And finally ended up looking like this, I must learn how to re-size and post pictures correctly and in the right order!
I should add that I started of with a very small diameter drill and worked up in 0,5 mm increments to maintain center untill finally reaching 8,5 mm tapping size for 3/8"-24 UNF thread. I was quite pleased to finish the eighth one successfully! 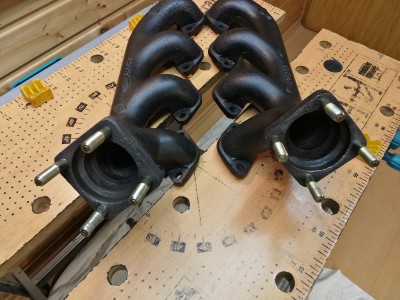 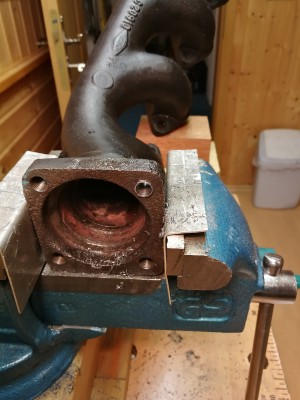 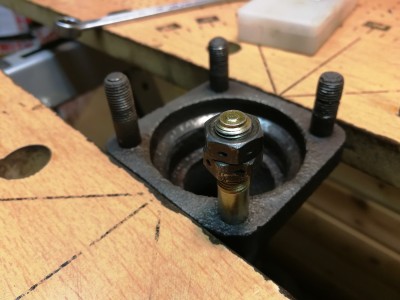 Brilliant result, Rob, that is a difficult job and you have done very well indeed - thanks for sharing the process.

Out of interest is that a steel nut you have on the thread ?? Ideally should be brass with a split washer, the latter of which I think is on the stud.

The brass nut (3/8" UNF) will not rust on to the stud and makes it a lot easier to remove the downpipes in the future.

Yes Richard, they are two steel nuts I just used to spin in the new studs, new brass ones I have for re-assembly.

Here are some Links some here may find useful now or in the future, studs can and do break and can be the cause of sleepless nights.

First an industrial no-nonsense approach for those with an angle plate and milling machine in their garden shed :

And here clearly the god of broken stud removal, and he's one of us! :