I was sorting out some old photos and came across this: 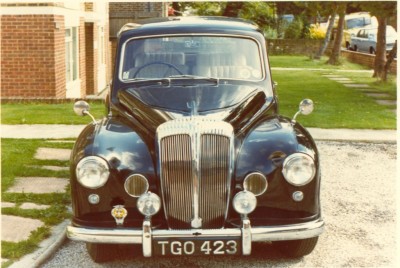 It was an 18000 mile 1956 Century MkII that I bought in 1973 from a garage in Beckenham , Kent, called Richard Epps. Its a shame I can't trace any pictures of the interior which was in unmarked cream leather, a perfect burr walnut dashboard and the beautiful turned aluminium switches from the Daimler 104 Ladies model. It really was as new! Its first owner lived in The Avenue, Beckenham and had bought it upon his retirement in 1956 (Nice present to self!) By 1973 he gave up driving and sold the car to Epps. I paid £685 and sold it about a year later to a club member named Reg Turner for about the same price. It was a superb pre-selector car and much more comfortable than my 1953 Conquest. The 2kw Smiths heater was a revelation and made the car very cosy.
The car goes off the radar on the MOT history site in April 2008 when the mileage was 24000.
Does anyone know of its whereabouts or whether it still exists?
Top
Post Reply
1 post • Page 1 of 1