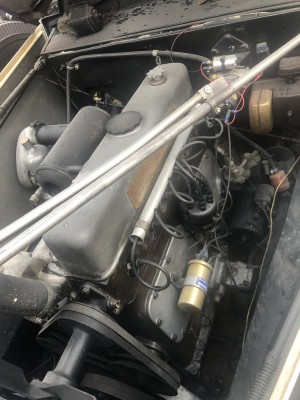 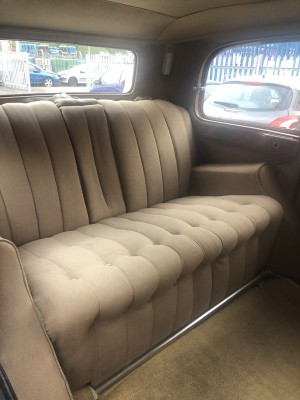 As you say Mark a very fine elegant motor, but in a poor choice of "Traditional black over ivory". That boot lid looks quite wrong.

Lot of motor for the money and with a re-colour to, dare I say it, black boot lid with custard yellow or a nice rich silver instead of ivory.

I guess the colour scheme will suit the wedding car trade, which is where it will again end up I guess. Syd
Top

Great value. I wonder why nobody keeps it for long?
Graham Emmett
Northwich, Cheshire
Joint DB18 Registrar (with Marcel Renshaw)
DB18 1949 LCV522 (Yes that one with the P100s)
https://www.db18.org
Top

I think it probably is the colour plus being a pre-selector. The later photos taken indoors show it in almost an off-white, Old English White as opposed to the Bleaney photos which show that it is actually black over Kitchen Appliance White. Unless there are issues we don't know about, I cannot understand why no one hangs on to it. I change my cars almost as often as my trousers, but I will never sell my ELS24 - these cars do grow on you like that. This one is also rare in having the very elegant and original cloth rear compartment - so many have been cheaply re-upholstered in poor quality leather. Someone should buy it and cherish it.

Some years ago I treated myself to a Barker bodied 20/25 which I thought was quite decent and it turned out to be a real dog. I spent quite a bit of time and money on it, having done some work on RRs before and feeling reasonably confident as to what to do with them. However, I ended up rewiring the whole thing properly, my wife recovered the back seat, having the dynamo rebuilt (£500 = the lack of charge having been diagnosed by the well known dealer's workshop as a regulator box fault but wasn't, to my cost) and the right hand gear change was a sheer misery in a town with mini roundabouts. It also seemed to lack the power you would expect from the size of it, but then it had a lot of bodywork too. As Henry Ford said, 10 of the horses were working to keep the other 10 quiet.

It had to go and nobody wanted it. Don't be fooled by the price asked for a Rolls, they are completely meaningless. Eventually, I found an elderly chap who wanted a Rolls and had a 1938 Triumph Dolomite he'd never got finished and I swapped with him. Another year of work on the Dolomite and I sold it for £10000 less than the Rolls cost but there we are. No more RRs. By the way, pre war there was no Rolls with a factory supplied body. It was only after the war and the success of the Mk 6 Bentley with its standard steel body that they brought out a factory option.

You'll notice that the bulk of RRs for sale in the UK are being offered by brokers. They have no money themselves invested in them. They stand to gain a bit if they sell but if they don't, it's no loss to them and if someone has something to trade that takes their fancy, they can offer what seems like a good p/ex price. The selling prices could tell quite a different story and if you follow some of the cars for sale privately, they just keep coming back and back again from the same seller.

I console myself with the thought that Daimlers like this come up for sale at reasonable prices. I don't think I really want another car as large as these but the pre war saloon car prices (and some open ones too are falling - anyone here ever had an interest in Austin 12 Clifton tourers ? - they have taken a real tumble compared to 25 years ago) and it's only three years to the lump sum so maybe a 15 or similar will come my way then. I was out with the LA10 yesterday for the first time in quite a while and it was really nice going along with the sunroof open and enjoying the Mulliner body and preselector gearbox. All very pleasant. Far far more enjoyable than a Rolls. Round here there now seems to be close to zero interest in having a vintage car for weddings : buses, VW campervans, stretched pink American tanks are in and old cars are out which probably partly explains the slow trade in large white cars
Top

I've had RR and Bentleys for over 12 years, so far 3 pre-war and around 8 or 9 post war examples. Really good ones are lovely, but it takes a lot of money to get them there. Many of these good cars never make it to the open market. A 20/25 with an appropriate body is a thing of joy, but probably better to admire than drive, I agree. That does apply to most pre-war cars though - they are rarely geared for modern roads, even if they have the power available. Driving a classic is also a lesson in how far the motor industry has advanced in the past 50 years or so. My current RR is a 78 Corniche, which was probably the last word in automotive craftsmanship in its day. The sad fact is though that it is not as well made, not as quiet, not as reliable, or as agile, or as luxurious as my everyday 210,000 mile Subaru. I still love it though!

The car is sold, I made contacted the seller to purchase, I had a reply stating the car was sold and paid for
Top

Hope the new owner surfaces on here. It looks like they have bought a very nice car very cheaply.

The car's for sale again:

Return to “Daimler for sale”