Hi
If you are going to change the master cylinder then it may be worth considering dual circuit braking. This removes the need for the valve. I have written an article on how I did it on Margarets SP. I will try to attach a copy to this post, if I am not successful then e-mail me and I will send you one.
Regards 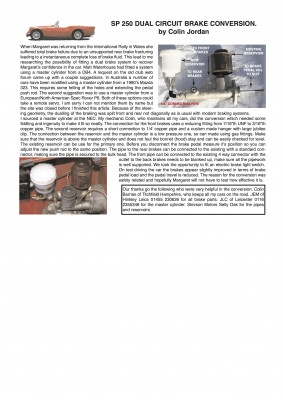 Some good answers posted.. I'll chime in :- the flex hoses are inexpensive and all 3 should be replaced if showing obvious signs of age ... another common issue is problems with the master cylinder .. people tend to over adjust the push rod when these have provision for adjustment, which if there is insufficient free play ( there has to be enough free movement in the rod to allow piston to fully retract) will cause pressure to build in system, creating the problem described.. also internal seals in master cylinder can swell and come partially stuck over time ... if there is ANY contamination/mis colour in the brake fluid.. seals may be suspect..
Top

Over a period of a few decades I've upgraded the braking system of my SP to include Kunifer pipework, a remote servo, braided hoses, stainless caliper pistons and silicone fluid. After the most recent stage, the s/steel pistons and braided hoses, all four calipers caused binding on road testing that only resolved when the internal components of the restrictor valve were removed. The m/cyl push rod adjustment is correct.

Like others I've always preferred to use a double pump to get a firm pedal although the car stops without that. Curiously however when using a double pump to reduce speed but not stop, the brakes continue to hold for about one second after the pedal is released; this does not happen with a single push. This has been the case for several years, it doesn't change, although the average annual mileage is only around 1000. I've done nothing further to investigate it because it has no other consequences. Perhaps it's time I checked the brake calipers again, although I doubt that the cause lies there.

The Lockheed type servo was bought from DMG; I guess that it may be the culprit, but having had the experience of a servo locking the brake calipers on another car I'm reluctant to interefere with it unless/until the problem deteriorates.

I suspected my servo and to prove it I bypassed by using a flexible brake pipe between the input pipe and the output pipe of the servo and re bled the system and it was fine. So the servo was faulty and I sent it to Past Parts who did a brilliant job on refurbishing it.
I also replaced the brake master cylinder with a 7/8" master cylinder and the double push is eliminated.
Paul
Top

Many thanks for all the sage advice, thoughts and suggestions.....
Am pleased to report that the issue is now fixed and it was indeed the restrictor valve. Once on the bench and stripped it turned out there was no contamination in it, but it had FAR too beefy a spring fitted...... I can only assume it's been changed at some point (not by me I hasten to add!) and too high a pressure valve had been fitted. It was maintaining far too much back pressure in the brake system - fluid splurged out of the lines as soon as I cracked the connection at the 5-way connector - I reckon it was something like 20psi as it pegged out my 10psi pressure gauge with ease when I tested it after cleaning.

It's all back together now (with the new servo) and I am pleased to report that the brakes are excellent, with no hint of binding or slow releasing like they were. Pedal feel is good and there is minimal 'long pedal', only vaguely noticeable after tight manoeuvring or following a long twisty run without touching the brakes. No need to pump though and it will stop on a sixpence. I now plan to strip, clean and rebuild the Lockheed servo I took off so I can double check there weren't any issues within and paint the vacuum can black - it was mounted behind the grille and it always bothered me that the vacuum can was visible in its cadmium plating. Then I can store it until I next do some work on the brakes or change the fluid whereupon I can refit it should I feel inclined.
Top

That's great that you have found the problem, I had wondered about putting a slightly stronger spring in the restrictor valve but never got round to doing it.
It's good to hear when a problem is sollved, it's does not always happen on this forum.
Paul
Top
Post Reply
16 posts