Ozzsp250 , thanks for posting those pictures.

Is it the case that all of these modifications including the sourcing of the oil supply were made by the previous owner? I am curious to learn of the thinking behind the choice of oil supply.

I observe that the outlet to the banjo fitting that supplies the heads and rockers would be a convenient source of supply as it is adjacent to the feed to the spray bar. That begs the question of the adequacy of the supply at that point. I suppose that as the main oil gallery feeds the main bearings and cam bearings firstly the adequacy at that point for the supply to heads/rockers will be diminished.

You mentioned some oil pressure testing you did on the test stand , what results did you obtain?

Also those delivery ports in the spray bar , what diameter is the orifice ?
Top

The engine was professionally built for racing for the prior owner [Don Narde], unfortunately I don't know who the engine builder was [reportedly in Florida] and the original owner passed away last year. He had the car set up with remote oil filter so I'm sure it was a convenient point for supply, perhaps the rules prevented modifying the supply to the valve train, although it appears he bent the rules a lot.

From memory the supply ports in the spray bar are 1/16" - just drilled stainless steel tubing. I did not see any real oil pressure change with hand valve open or closed also with the engine on the test stand I have never reached real world operating temperatures but once I get back into the project I plan to change that. Supply pressure was around 40 psi at idle quickly increasing to 60 psi by 1000 rpm so it may have been cracking the relief valve. The engine has ex-Majestic Major 2" SU carburetors that were running miles too rich and side to side air flow thru the inlet manifold had about a 70/30 split that I need to resolve prior to installing it in the car.

The original owner was caught cheating by installing a 4.5 liter in his SP250 and racing it in its original class, he went from close racing others in his class to lapping them. Externally the only indication of the re-engine was two bumps in the hood for the SU's. He did say that at Watkins Glen once in 4th gear he could run the rest of the race without shifting gear due to the high torque of the engine. It also meant the engine I have could not be used in his car due to all the modifications so ended up with another 2.5 liter engine with 'legal' changes. 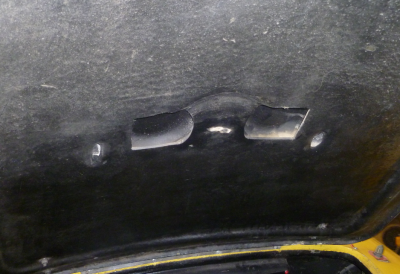 Retired Race car but does still run, Don was talking about putting in the museum at Watkins Glen before he died. 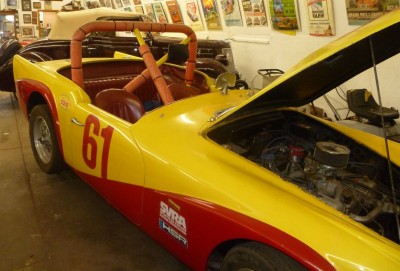 I'm surprised by the interest that this thread has aroused, being less than one week old. I'm not sure whether I've missed it somewhere, but no one seems to have mentioned the difference between a standard SP 2.5 V8 and a saloon 2.5 V8. I apologise if I have missed it, but a standard SP engine has a cast longitudinal oil bath immediately below the camshaft bearing housings, so that the cam runs in a continual suply of oil along its length. This was deleted in the saloon engine, presumably as a cost saving measure regardless of the consequences for the cam if the top gallery of the engine were to be drained at any time. AFAIK it was a NZ member who drilled two holes in the front of the gallery of his SP 2.5 engine, one on either side of the cam, to allow the oil below the oil trough to drain via the timing chain cavity to the sump, which therefore did not interfere with the lubrication of the cam.

It would clearly not be a good idea to drain the camshaft gallery on the top of a saloon engine by any means in view of the consequences for cam lubrication of the absence of the oil trough. Meanwhile the consequences of having a large old oil reservoir at the top of the engine for oil changes in both SPs and saloons does imply that more frequent oil changes would be wise. This may not be an issue any more for any of our cars since the vast majority lead a very sheltered life; I generally still aim to change the oil and filter on any of my old Daimlers at least annually although both now do little more than 1,000 miles pa.

Both the SP and the DJ256 have spin-on filter conversions, that on the former a remote unit with an oil cooler also. My 450 now has a remote filter and oil cooler, which were not present when I bought it. I hope it will finally return to the road later this year.

The photo shows the SP 2.5 trough below the cam bearing housings during the engine rebuild in 2011. 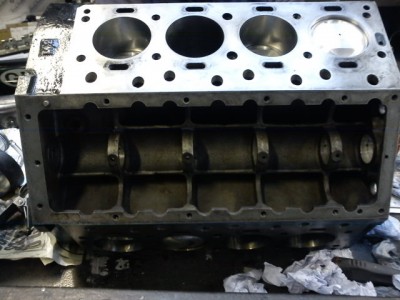 Thanks for the info about the secretly modified SP'450', it's good to hear of one that has actually raced to good effect even though it has not been left in that configuration.

tjt77 wrote: ↑
Thu Jan 10, 2019 9:05 pm
the later cylinder blocks did indeed have the cam gallery drilled.. they have a series of 1/8" holes drilled along both sides of the ridge.. 12 holes in all to allow oil to drain back into the sump.. there is NO advantage to having the oil rest in the bottom of cam gallery..its far too low to reach the camshaft and help lubricate it.. I expect even the drilled galleries holes to plug up eventually, as these engines seems to create a LOT of black crud in the oil (likely due to having pistons with only 3 rings and originally a ineffective cast iron oil control ring..later engines went to a multi piece oil control ring ) ..there is almost always some very nasty black gunk in the cam gallery that is hard to remove... some people have added a tube with holes attached to an oil feed to add extra lubrication to the cam and lifters in the hope of extending the short life of these components.... wise move Id think.

tjt77 ,
This is an interesting observation regarding the late sedan blocks. I query if there is any record of the engine numbers when this modification was added? I have understood my block to be a later block but it does not have the holes.
Having examined my block I have to agree that the bottom of the oil galley does collect a lot gunk. For me I have to conclude the oil galley idea incorporated is not a great one and the addition of a spray bar coupled with proper drainage to the sump is a sensible modification to incorporate in order to enable full circulation of the oil and proper drainage of all oil during routine oil changes.

Hi
If you look on Robert Grinter's web site, www.robertgrinter.co.uk he does an article on the using of a saloon engine in an SP. This shows pictures of the different galleries. As to the oil remaining just change your oil and more importantly the filter on a regular basis!
Regards

Colin,
Thanks for posting the link to the Robert Grinter webpage. I have looked around this site but cannot find the article you mention.

Could you post a direct link to that article? That would be most appreciated.

This should get you there, down at the bottom of the page:

...and here's the actual page.
Nick

Thanks for posting those links folks.
Top
Post Reply
49 posts