Ive been asked to provide some images of cylinder blocks that are drilled for oil draining from the camshaft gallery..unfortunately I cannot do this.. interface between camera and computer is broken and Im told the hard drive is on the blink..furthermore, when it was all working my computer has too many pixels and I'm not knowledgeable enough to resolve this alone.
Best I can do is describe what is done :- some blocks (mostly later.. but I do have one from late 1965 that is drilled..it had ONE rebuild in late 1970s ..the person who did that rebuild did not drill anything..claims cylinder block as it was when he aquired the car @apprex 70 k miles ..he was 2nd owner:- Ex Netherlands market car with full history) Ive seen several later blocks ( from V8250 saloons) that are also drilled.. I also have a very late un numbered block that is NOT drilled and also has no flats machined on the camshaft jpurnals like all others Ive seen.(not fully sure but it might have been ex marine application.. block was a light metallic green in colour when I aquired it) .
the drilled blocks have a series of holes at the lower part of the cam gallery either side of the central web ..these holes are approx 1/8" diameter and either 4 per side (placed approx 1' in front of the side webs.. none in the very front between the narrowest webs) or 7 per side on later blocks ..in which case there are 2 holes between the wider spaced central webs..and just one at the rear either side.
Its really self explanatory.. not sure if it really helps much..but it does allow almost all of the oil to drain out when changing oil in normal manner.. Id suspect these holes are highly likely to get blocked up if the engine is not serviced frequently.. they do seem to accrue a LOT of black crud over the years.. more so than many contemporary engines..
Top

tjt77 Thanks for taking the time to respond to this request. It is a pity that your camera/ computer is letting you down.

Whilst the general description is somewhat helpful. Photographs illustrating the precise location would be helpful as I am mindful that drilling in this location is close to the water jacket. Unless it is understood precisely what the factory did then attempting to do this without that understanding would be potentially disasterous.

Changing oil on an SP250 always seems to get messy. I purchased an oil extraction pump from Lidl about 12 months ago and found it very useful and saved a lot of mess.

I see that the pump is on sale again this Thursday for £12.99 - see following link:

Are these the holes you are talking about? Rather fine and getting clogged up on my SP250 engine, though I think it is a saloon block (?)
Areas of holes are on both sides of the tappet chest, and still high enough up to retain quite a bit of oil. 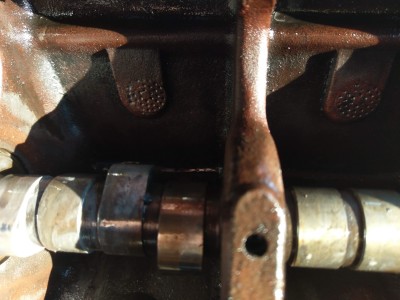 migray,
Thanks for your interest in this topic and your response.

I do not believe that these are the holes being discussed. Those raised portions where those small holes are located if they were in fact small ports then they would take you directly into the water jacket. I have explored the bowels of the water jacket in that area and I think that is what you will find.

I also have raised portions in the same location on my block but are round not elongated as are yours. They are located where the circular formation of all of those little holes are located.

The previous discussion suggests the holes are at the bottom of the valley adjacent to the main oil gallery.
Last edited by fredeuce on Tue Feb 19, 2019 12:26 am, edited 1 time in total.
Top

I guess you are right, the water ways are just behind that area. I have tried to clean up the areas where the "holes" appear and they don't seem to clear out. They seem to be in a circular core plug which is fitted into the sides of the cam chamber, maybe it is just an indentation pattern but I cannot figure out why they are there.
Top

RE: Don Narde's Yellow #61 race car.
Did he really drive the first Daimler-Benz?
During the nineties it is said that he tired of every novice NASCAR fan coming up and telling their pals that since the race car was a Daimler it must be part of the Chrysler/Daimler merger and therefore an old Daimler-Benz. After stuffing the car into the rails at The Glen, you can see that he grafted a Benz front grill to allow more airflow to the 4.5l engine for racing.
As his way of "fitting in", he often claimed he now drove the only true SP-250 Daimler-Benz just for his special fans.
Bud

He actually raced a 1958 - 1960 Mercedes Benz SL300 roadster at the same time he raced the SP250. He told me the Benz was dead reliable but the "Dart" was more fun.
He also stated he put his spare SL300 grill on the Dart because he got tired of people asking if it was a Benz........the grill was still on the car the last time I saw it.

He said the only car he damaged racing was his MG midget at the Glenn, its running gear was put on a second midget that his wife drove around town [Horseheads, New York] and it was still in his garage.

Ozzsp250
I am now commencing the task of making up the spray bar and to locate in a similar position to yours. My engine is a 2.5 sedan version and has a large boss cast into the top of the cam bearing web. The clearance between the top of the boss and the underside of the tappet block measure about 1/8" .

I query how sufficient clearance has been obtained to fit the spray bar to your engine?

Has a relief been machined into the tappet block ?
Top

I'll dig into my extra 'junk' today as I have the original spray bar somewhere, I elected to fabricate a new one from stainless steel tubing and I'll take measurements, I believe I used 1/8" tubing. I also finalized the external oil feed and will take a photo. I used solid nickel / copper brake line which was easy to bend and fittings readily available.
Top
Post Reply
49 posts