My 250 saloon is in desperate need of a respray. It will need taking back to bare metal. I've already looked through the forum for bodyshop recommendations but can't see any.

Can anyone recommend a bodyshop to undertake this task? I am based in London/Essex.

Robert Grinter based in Essex knows these cars very well and has facilities for full or minor respray. Check the 'Services' tab at the top of his webpage.
Nick

As I understand it, a lot of Robert Grinter's paint work is done by Anglia Resprays. They are just down the road from Robert's place and my Dart is currently with them.
Tim
Top

Very pleased with the results from Anglia Resprays. 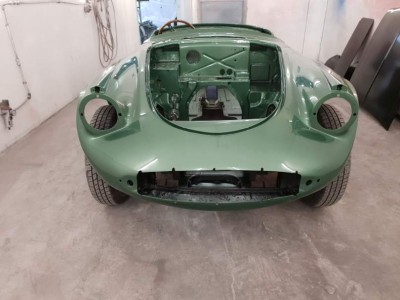 Arghhh... I dont enjoy painting ( although I do all the prep work 'in house' and we have a proper paint booth) and am now on the THIRD repaint of a Mk2 jaguar..( opalescent or 'silver blue') initially we decided to go with modern 'base clear' but after testing finish on one panel, I did not like the overall look ( too 'glassy') and then decided to source some single stage acrylic enamel ( as was originally used on these cars by factory) which requires something of a different skill set to apply ... first application had some flaws (mottling and uneven finish due to too small a nozzle on paint gun and heat over 70o F causing the paint to go go off too fast) so we re did the lower half of car.. that had issues too, so it was re-done again.. its now far worse.. so to will be sanded back to primer and the whole process started over..
I did the last one myself in same meterial and its came out very well ..but it was 'old english white' rather then metallic blue , also Im told the current acrylic enamels are NOT same as those of 20 yrs back, which had a lead base making application easier.. may look 'out of state' to get some of the proper stuff..
Top
Post Reply
5 posts • Page 1 of 1