Not wanting to get drawn in to the "best engine oil debate" - but I will be interested to know if any V8 users (Saloon and SP) actually use 20W/60 instead of the normally prescribed 20W/50.

If so, why did you choose that route ??

An xxW-60 oil might be beneficial to use in an engine with worn crankshaft bearings where an xxW-40 or xxW-50 oil would not sustain a reasonable pressure when hot. Otherwise in a normal engine it would lead to increased friction and increased heat in the bearings.
Top

I have always used 20/50. Used to be Castrol, Duckhams and also Jaguar Daimler Classic oil but now Halfords!

SimonP
Daimler SP 250 - "To feel its eager response as you open up is to know a new motoring adventure"(Sales brochure) The adventure continues!
Top

consider this. The labelling on multigrade oils works thus :- the first number refers to stated viscosity of oil when cold ..the second number is oil viscosity of stated oil when hot ..a 20 weight oil will thin somewhat when hot..but a 60 weight will thin a LOT when hot.. a 60w oil can be significantly thinner when hot than a 30 w oil.. hence a 20/50 is likely to be thicker than a 20/60 when hot..
As with Russ Carpenter.. I personally run 15w 40.. reasons :- experience has proven it works well ..and of course cost.. being a common oil supplied for larger diesels its relatively economical to purchase.. Shell Rotella, Chevron 'Delo 400' and Mobil 'delvac' are the common 15w 40 oils I use in ALL my classics.. with very good results..
Top

I'm sorry my friend, you have some of this wrong.

The first number (the W number) is not a viscosity measure although the result will relate to the viscosity of the oil. At the temperatures the test for this rating is performed at, all oils are far too thick to actually measure the viscosity so a different measure is used. It is a "cold cranking" measure which is the amount of effort required to keep a motor turning a stator in that oil at certain defined cold temperatures. The value recorded for that effort is used for the W rating number. To complicate matters the temperatures that this test is performed at vary according to the target W rating. A 20W oil is tested at -15c, a 10W oil at -25c and a 0W oil at -35c. If an oil manufacturer wants to market a new 0W-xx oil it must pass this test at -35c. If it only achieves the test result at -30c it would get a 5W rating, not a 0W rating.

The second number is indeed a viscosity measure taken when hot, in fact at 100c. In other words after it has been thinned from getting hot. But it is not a specific value. A "30" grade oil will range from 9.3cSt (centi-Stoke) to 12.4cSt, a "40" grade oil between 12.5cSt and 16.2cSt, a "50" grade oil from 16.3cSt to 21.8cSt and a "60" grade oil from 21.9cSt to 26.0cSt. One major oil manufacturer has a 5W-30 oil with a hot viscosity of 12.2cSt, another one has a 10W-40 with a hot viscosity of 13cSt. At operating temperature these 2 oils are as near identical in performance as to make virtually no practical difference yet the labelling would indicate something quite different.

What does this mean when you put it together as a multigrade? It basically means that the oil behaves like one grade when it's cold and then behaves like a different grade when it's hot. An SAE50 oil would be unbelievably thick when cold, like treacle, and you may even find it impossible to turn the engine whereas an SAE20 oil would be OK.
A 20W-50 oil is in fact an SAE20 base oil with added viscosity enhancers that stop it from thinning out like an SAE20 oil would do when it gets hot. Those viscosity enhancers make the oil behave like an SAE50 oil when hot while allowing it to behave like an SAE20 when cold. Over time though, those viscosity enhancers get destroyed in the engine and gradually that multigrade value will deteriorate and become 20W-40, 20W-30 and if left long enough would revert to a straight SAE20 at all temperatures.

The graph below shows how oil viscosity behaves with changing temperature. At say 90c a 20W-50 has approximately twice the value as a 10W-30 or a 5W-30. Remember this is not the W number, this is the 30 or 50 number. The cooler an oil gets the thicker it gets and you can see in the graph how much thicker a 20W-xx oil is compared to a 5W-xx or 10W-xx oil is.
If an engine manufacturer recommended a 5W-30 oil that means that the engine has been designed for an oil of thickness around 10 - 11cSt at normal operating temperature. At 100c a 5W-30 will meet that target and also the 10W-30 will meet that target.
The difference comes at lower temperatures, say at 0C, the 5W-30 oil is around 50 times too thick whereas a 10W-30 oil is 76 times too thick. A 20W-50 oil in that same engine will be 285 times too thick for the engine as well as being around double when hot. 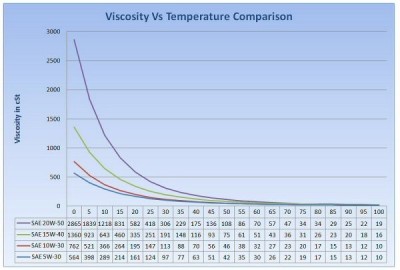 The recommendation of a 15W-40 is a reasonable one. Personally I think a 5W-40 is better and I use Mobil Super 3000 5W-40 in mine. Notwithstanding all the above you're not going to blow up your engine by using a slightly heavier weight of oil and the most important thing is to change it regularly.
Top

If I remember correctly the handbook for the SP specifies a 10w 30 grade.

Agreed, the most important element is regular changes, especially in a dirty engine like the Turner V8. My late grandfather was fond of saying that a gallon of engine oil was the cheapest mechanic in the country.

The handbook recommended 10W-30 because the only multigrades available at the time were 10W-30 or 20W-30.
Shell Multigrade, Castrol, Mobil Special, Havoline Special, Duckhams Q5500 and Esso Extra were all 10W-30. Esso Multigrade was 20W-30. I'm not sure what BP Visco-static was but I expect it was similar. Armstrong Siddeley recommended exactly the same set of oils as Daimler.
A couple of other historical oil facts:
The famous Duckhams Q20/50 was launched at the 1963 Motor Show
Castrol XL became a Multigrade somewhere around 1963. Castrol sponsored a record breaking Jaguar Mk2 endurance run at Monza that year using Castrol XL multigrade.
Castrol GTX 20W-50 was launched in 1968.
Top

I am not so sure the Turner V8 is a dirty engine, I suspect that it has earned that reputation due to local short runs or mostly town work, back in the early 70's I regularly commuted between Sunbury on Thames and the Portsmouth area with a few runs to Southampton and the New Forrest whilst in that area, when changing oil on the recommended interval the Duckhams 20/50 was still a green hue, not as bright as new though but compared favourably with other engines run on similar distances using the recommended change intervals, Ford V4 and Triumph 2.0l straight 6
Owner since the 70's, Genghis is slightly to my left.
Top
Post Reply
13 posts