I occasionally have heating problems with my DaimlerSP250, especially when I stand still, traffic jam. I still have the original mechanical fan and an overflow bottle on the radiator

What are the possibilities/options
• Cowl mounting around the fan, is it still available or are there universal versions
• High performance radiator (manual or thermostatically switched)
• Push fan from Revotec in front of the radiator (Kenlow is no longer available), (manual or thermostatically switched)
• Remove the mechanical fan and mount a Revotec pull fan
• Special coolant
Other solutions?

There are some basic checks you should perform before throwing money about, that may not solve the issue.

1- what is the condition of the car radiator and have you had re-cored in the past and do you flush it through every year with a proper cleaner ?? In addition you will need to reverse flush it. Poor performing rads is the most common issue.

2- the same applies to your engine block, a bit trickier to get all the muck out but you can certainly do a lot to assist it flow better

3- coolant should be blue and at least 33% this needs changing every couple of years.

4- is your thermostat working correctly and how old it + is it the correct one.

5- overheating in slow moving traffic suggests that the water is not being cooled and flowing freely to do its job; this really goes back to points 1 & 2.

6- do you have the correct rad cap pressure ??

7- do you have a head gasket issue ?? You can check this by removing the rad cap from overnight cold and fire the engine up. If you have bubbles surfacing in the rad neck within ten seconds then YES you do have a h/gasket issue.

There are other potential issues such as timing etc, but I think the coolant system is very much your first point of call.

I think it will also be worth checking your heater matrix, if that is blocked then it is very likely the rest of the cooling system will be of similar status. I have attached a couple of photos of my heater matrix when I stripped the engine down recently. I think the photos say everything !!

Hope that is a decent start to be getting on with. 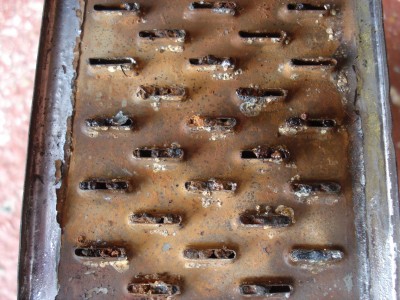 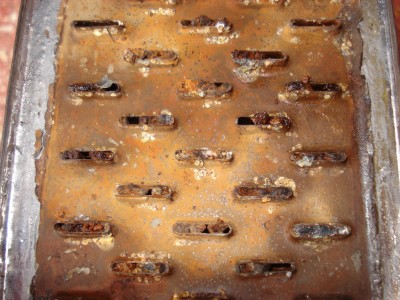 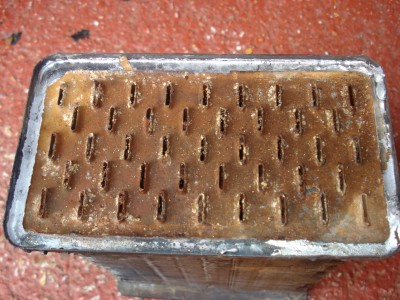 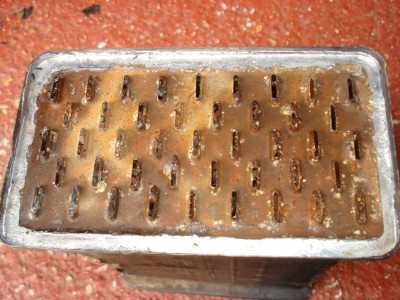 The original fan was barely adequate when the car was built, by the time the 70's arrived the traffic was such that the engine overheated in most cities and many of us fitted electric fans, the blades have very little angle to have a decent flow and at 500rpm hardly stir the air. With the traffic today even villages can have enough slow moving traffic for the car to over heat, there is a huge supply of electric fans either bespoke or from a scrappy with choices of one large or two smaller units either infront of the radiator or behind, the choice is yours, but do remember in front it blows and behind it sucks

Owner since the 70's, Genghis is slightly to my left.
Top

Having owned my Dart in the early 1970s I found that it only once got so hot that I thought it was going to boil - in a hot summer jam leaving the Bath & West Show, but it didn't, so the original fan should cope with normal driving.
However, the real way to cure overheating is to clear out the c**p from the block, which is expensive. A reconditioned radiator would help a lot, but there's still a possibility of running hot if the block is full of sediment.
Top

I think Richards contribution is as good as it gets but I also agree with John.

When I got my SP it was fitted with R&P steering and there was an electric fan in front of the rad with a switch tucked under the dash.

I have become used to the eccentricities of the set up, the fan is run off permanent 12 volts so I have to remember to both switch it on when needed and switch off after. It is not necessary when on the road even on the hottest summer day, but it is needed when in prolonged slow traffic.

What I wanted to say was that it matters not if I turn the fan on, under normal driving conditions the engine remains within safe temperature limits, it does occasionally get hot but never so hot that it could cause damage, even in town traffic it has never become too hot, despite my occasionally failing to turn the fan on.

When I got the car I joined the old forum and took advice from Laurence Jones. Buy a new correct pressure rad cap, carefully back flush the radiator, the block and the heater matrix, (a messy job), use blue antifreeze 50/50 and change it every three years.

Never had a hint of a problem with overheating, so I am sure that with the original fan, a clean rad and heater matrix, a new rad cap and 50-50 blue antifreeze, your engine should run at the right temperature. Syd
Top

You will probably realised by now Richard, that SP owners fall into one of two camps - those that have never experienced overheating and those that encounter it regularly.

I'll add my three ha'p'orth for what it's worth.

After rebuilding my car with a completely overhauled engine (by Russ Carpenter), a freshly re-cored original radiator, a new thermostat, a new heater matrix and control valve, a thermostatically controlled Revotec 'puller' fan and 50/50 Bluecol antifreeze/water coolant, I regularly experienced overheating - to the extent that it could often not be controlled by the fan.

Opening the heater control valve would improve matters, but since overheating was usually worse in hot weather, this was not a comfortable solution. It did however suggest that increased cooling efficiency could be a gain. After abortive initial attempts to improve airflow through the rad with shrouding, I finally fitted an uprated aluminium radiator by Radtec while still retaining the Revotec fan - Problem solved! 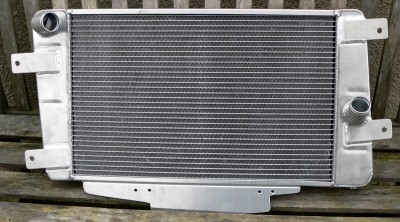 The temperature now stabilises around 170° F under normal driving. If a heavy demand is placed on the engine - climbing a long hill on a hot day for example - the fan will cut in and quickly bring the higher temperature under control.

While it may have little effect on your problem, I would echo the advice of others to use a 50% concentration of Bluecol coolant, and to change it every two years. The fluid contains corrosion inhibitors that help to control the head water passage corrosion often encountered in the engine, but these degrade over time and need refreshing.
Nick

Another thing to try is to undo the drain plugs on either side of the block (the lhs is tricky to get at without moving the starter motor). Coolant should flow freely - if not, then the coolant passages are blocked and this needs to be sorted before any other measures can be properly effective.

In my case, a fair bit of physical digging was required, followed by strong chemical cleaner. A Revotec 'pull' style fan now controls the temperature well, with only long, strenuous hill climbs in hot conditions making the gauge head for the right hand side.

Depends on what one understands as overheating, to me anything over 195f or beyond the white arc is overheating, this shouldn't happen with normal driving above 30mph, basically when the needle is vertical that's where it should be in normal driving on any day. When used in competition it will go to 3/4scale with or without a fan of any type, standstill in heavy traffic ( London north circular or motorway hold up) therefore if used regularly in these conditions an electric fan is advised, ( why would one use the engine in an overheating mode?) There are many propriety brands on the market for clearing out the block and radiator some more effective than others and others more corrosive to some components in the cooling system. I have always worked on the theory that neat antifreeze is suitable ( those suitable for aluminium/cast iron engines) drain when dirty and refill until it runs clear, once clear revert to recommended mix, this worked extremely well on a very badly blocked yacht engine, took 2 seasons to clear but it was an auxiliary engine so not constant like a car.
Owner since the 70's, Genghis is slightly to my left.
Top
Post Reply
8 posts • Page 1 of 1