I am sorry to bother you, but wondered if you could answer a quick question. Have been trying to open the bonnet and all I can see is a black plastic knob hanging under the dashboard on the drivers side. It seems that the cable must be broken because it slides easily in and out without doing anything.

So could you please tell me if this is the right knob, and if the cable is broken, how I might spring the catch to open the bonnet?

Kind regards and thanks

Sent from my iPad

to open the bonnet with cable detatched/broken requires some patience..there is an access panel directly under the grill held in with 2 phillips head screws.. once this panel is off you can reach up to get to the 5/16" head bolts that hold grill in place.. remove all bolts then remove grill.. you can then access the bonnet catch ( operated by a lever approx 2 1/2" long very close to the actual holding pin the attatches to bonnet.. and forward facing, just to left of centre) you will be able to feel the operating lever and likely the cable end is still attatched.. move lever to left ( looking back from font of car) to release the bonnet catch .
Top

,Many thanks for that, I shall have a go at it once the suns gone down a bit!

So presumably that is the correct knob I was pulling? It offered no resistance and I pulled about 4ins of cable out, though it seems to go back ok.

Yes it is and appears to be disconnected.

You will need to follow the advice from tjt77, it is a doable job just fiddly.

The other way is to point a touch through the front grill at the top, slightly to the left as viewed from the front. You will see the catch operating lever pointing at you, and probably the end of the cable. Use large thin screwdriver or similar to push the lever to the left. The bonnet should pop open.
You can then remove the bonnet catch by undoing two bolts.
The new inner cable can be fed through the old outer cable. The exact clamp point on the new cable is by trial and error, but use the original cable as a guide.
Hope this helps.
Best rgds
Chris S
Top

This pic gives you an idea of the set-up, although the striker in the catch is actually stuck in these pics. 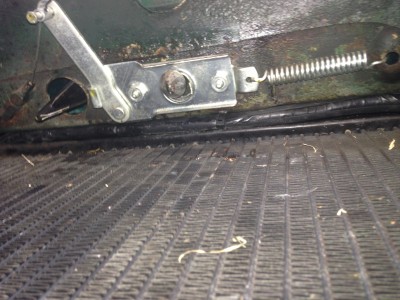 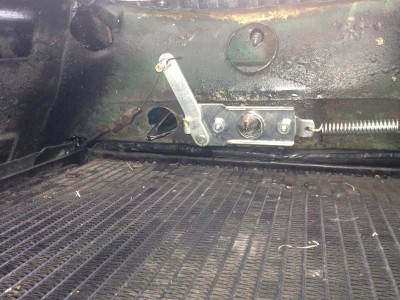 It is very important that the striker is in the absolute centre of the hole in the body, see 2nd pic. 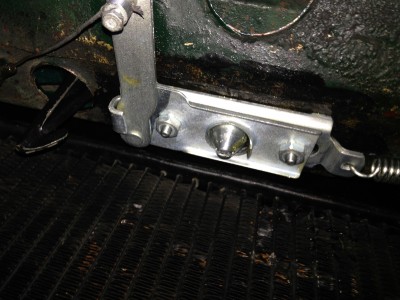 This can be achieved with the use of masking tape see 3rd pic. 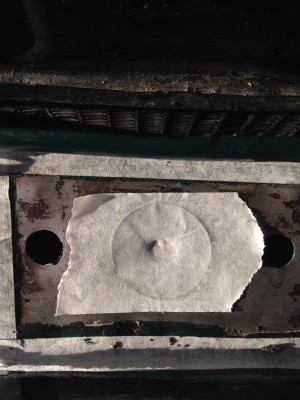 Gently close the bonnet against the tape after adjustment until you get it in the centre. This is viewd from the top of the body with the catch removed.
I had the problem that the striker was stuck and see where the striker was positioned I had to remove the inspection plate under the car and it is a fiddly job to reach it and correct it. You may need to remove the chrome grill (another fiddly job).
1969 Daimler V8 250
Top
Post Reply
6 posts • Page 1 of 1