I am hoping someone can provide information on the following please.

Was the same engine block used for both the Conquest and Conquest Century vehicles ??

I know the Century had an alloy head with larger valves, higher CR, high lift cam and twin carbs. Other than that are they the only differences between the 2x engines ??

If so, then can I presume that a Century alloy head can be fitted to a standard Conquest block, provided the above differences are addressed ??

Just tinkering with possibilities at the moment.

Thank you in advance for any assistance.

There are 2 different Century cylinder heads - the MK1 and the MK2. The main differences between them are the valves sizes and the shape of the manifold ports. I can tell you the details if you need them. The MK1 had H6 carbs. The MK2's started with H6 carbs and latter ones had HD6 carbs, in my experience.

As far as I know there are only minor design changes (strengthening) between the Conquest and Century blocks. I have both types stripped right down at the moment prior to a rebuild. The Conquest has a different arrangement for the oil pump and both need the correct sump, they are not interchangeable. I haven't tried to measure up the Century head against the Conquest block, as all the studs are removed from the block at the moment. I am not aware of anything preventing you fitting a Century head to a Conquest block.

I have heard that the early blocks had a different fitting for the rocker oil feed pipe but have no proof.

Engine numbers begin with a 7 or 8 (5 digits) - I have yet to find out if there is any link to specific models. My DJ252 (MK1 Century engine) engine no begins with a 7, as do Conquest engines I believe. The MK2 engine, made in 1956, number begins with an 8. Any info on this topic would be welcome.
Cheers, Henry

Many thanks for the information, that has certainly assisted.

Good question - I've wondered about this too, for many years. I hope to establish the answer soon, because I now have both a Conquest and a Century engine lying around spare; although access to the two is not easy I'd like to get the thing done, and this may provide the necessary stimulus. My principal question is whether the spacing of the cylinder head studs is identical; I'd also like to establish that the camshaft journals have the same dimensions, in other words that a Century cam can be popped into a Conquest block.

A very long time ago I succeeded in fitting a Century inlet manifold and twin H6 SUs to a Conquest head. I think I also fitted the exhaust manifolds and downpipe. It was not straightforward because the head studs are spaced differently and I had to extend all the stud holes in the manifolds with round files. However it did work and I think that the car's performance benefitted, slightly! So clearly the height of the Century alloy head may be deeper than the iron Conquest item, and the head stud lengths different also.

Personally I cannot imagine why anyone with a Conquest would not want to have the benefit of a Century engine under the bonnet. I would also recommend a pair of Century MkII HD6 SUs, that are so much easier to keep in tune and don't smell of petrol nearly so much, but that's not such an easy task.

I'll try to check those dimensions asap and report back.

Many thanks for your reply and update, it has certainly helped to get a better idea as to the options; especially as you have made a practical in-road. Any additional information will be greatly appreciated.

I was talking to David Beales today and he mentioned about someone ordering a head gasket for a DJ250 Conquest and then they sent him valves from a MK2 Conquest Century as a sample for replacements.
Having spotted that the valves and gasket were obviously of different models he had to go back to the customer and point out the difference.
The Conquest and Century head gaskets apparently aren’t interchangeable.
This obviously suggests that fitting a Century head to a Conquest could be troublesome.
Top

That is useful information. It will interesting to see the h/gaskets side-by-side to get a visual comparison; I will give DB a call and see if he can oblige.

Yes, a word with David may well give you the quickest answer, thanks Marcel. If so please post it here.

Marcel Renshaw wrote: ↑Sat Oct 03, 2020 4:15 pm The Conquest and Century head gaskets apparently aren’t interchangeable.
This obviously suggests that fitting a Century head to a Conquest could be troublesome.

I had a look at the David Beales eBay page - specifically the head gaskets for a Conquest and Conquest Century.

The following information is interesting and have attached the photo pertaining to the entry:

If I get a chance this week, I will phone David to seek clarification. 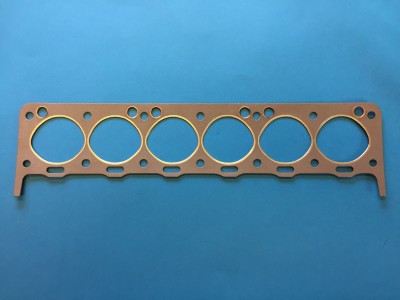 Should anyone be interested in a Conquest Century head and inlet manifold ( or 2) a friend has asked me to help him clear his spares as he no longer has his car.
There are a number of other items also.
Top
Post Reply
11 posts