Barrie, re Ipad, to store any picture click top and bottom buttons at the same time. It goes to camera roll.

Interesting pic of the DB18 Empress, as its one of the 2-door versions,

and it appeared to be for sale in the USA a few months. (see old Forum posts).

There appears to be very few Daimlers that attract big money - The Corsica bodies Double Six, the DE36 Green Godess cars,
Stardust....thats about it.

Well the DB18 "Churchill Car", but that appears to be more to do with the one ride he had in the car, rather than the car itself.

On the plus side, Daimlers are relatively affordable, and gives us a chance to enjoy luxury motoring at a nice price.
Top

Apologies for the late reply to your post, I've not visited the Forum for some time. Thanks for your kind comments about NFS2!

The two tone blue Hooper car with the signature recessed headlamps, OVC444, is the second of the two original Lanchester Dauphins, the one that was converted to a Daimler radiator grille by the factory for the first owner who was the then Daimler chief exec, Mr Smith. Oddly, although it is chassis no 70007 with body no 9967, the first Lanchester Dauphin NBT600, the one that still has a Lanchester grille, is chassis no 70006 but has body no 9968. OVC444 is pictured in"The Daimler Tradition" in its original silver over black colours. Being 1954, both of them were on a variant of the Lanchester 14 LJ chassis, not the DJ260, with an early version of the Century engine said to produce 92 bhp.

Subsequently Hooper built six more cars on the MkI DJ256 chassis, three with the same 2 door body design 8396, and three with a 4 door design 8404. All six had "normal" headlamps, unfortunately, and there were variations in the design of the interior trim. AFAIK all eight had pre-select transmission.

OVC 444 is still around and belongs to a current member of the DLOC in England. NBT 600 is also still known, in San Diego where it has been for many years having been found in a scrapyard and restored by its current owner, a story recounted in the DM some years ago. Sadly it had been separated from its engine which has never been found. It has a strict Conquest engine now.

Excuse me if I digress briefly; NFS2 was the first of the three two door DJ256 cars, and seems to have led a charmed life for most of its 61 years, having been it the hands of its first owner for almost 30 years; he sold it in 1984, only 10 years before I had the good fortune to buy it in 1994. I think from its condition that it had been dealer maintained, perhaps by Rossleigh in Edinburgh who had sold it, for those first 29 years.

The third two door DJ256 car LBR775 was auctioned on ebay in 2012; it was in a superficially poor state and unfortunately did not find a buyer in the UK but seems to have gone to someone in Eastern Europe. The first owner was Joseph Mackle. Judging from the photos on ebay it would probably not have been too difficult to put back to rights, so perhaps it will reappear sometime looking a little better? 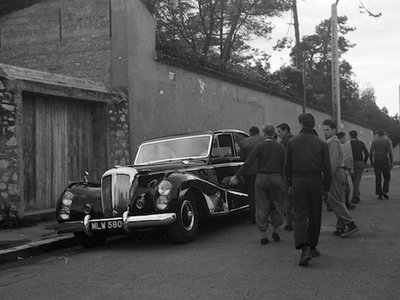 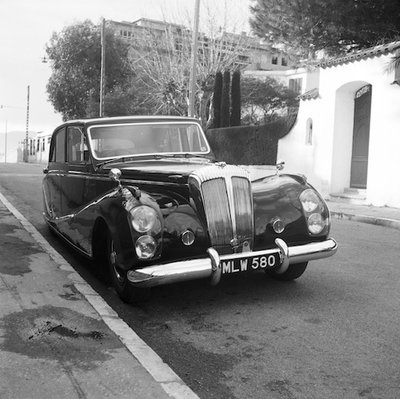 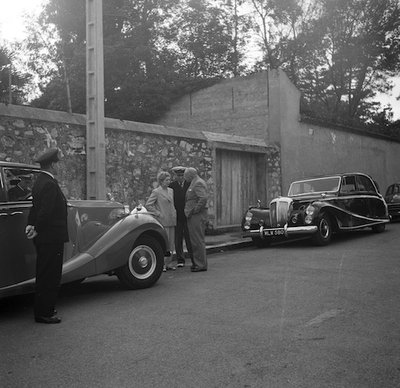 Geoff, thanks for the information.
Now that retirement looms and I'd like to revert to a Daimler I will keep an eye out for any of the 2 door Hoopers which come to the market and would be grateful got the 'heads up' from any of the Forum readers.
Barrie
Top

Hi Barrie. I've sent you an email via the Forum's message service about my 3L 2-door Empress. John
Top

The three B+W photos are of the DE36 Gold car I suspect, not Stardust, which had a DK400 chassis. I think that they were taken in the south of France on the Dockers travels. I wonder if Sir Bernard and Norah drove there in it or had it delivered by the factory after they sailed down on the Shemara? Incidentally if you Google Shemara you can find details of her very expensive recent total restoration. The original owners would be delighted.

The Gold car was "made anonymous" by the replacement of the recessed head and pass lamps with normally arranged lights, and presumably the removal of all the gold plated parts too, before the company sold it. Why did they change the headlamp arrangement? Sacrilege! The car wound up in the US where it still is I believe. I think David & Marie Adcock visited the owner some years ago on their travels.

The Gold Car is perhaps the ultimate Docker Daimler and Hooper creation. Such presence!

Thanks for the correction Geoff, always as well to be correct for future readers in 100 years time! It's a scary thought that this fledgling Internet will be the main source of info ad infinitum.......

More pictures to admire..........
I saw the Zebra car in the flesh at a car auction and it was the most extraordinary thing but not very comfortable. 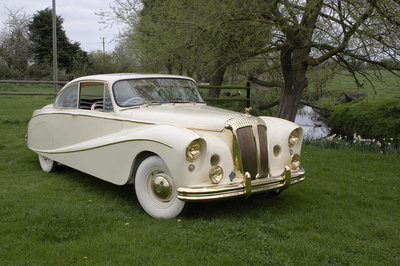 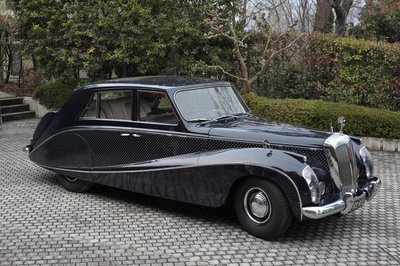 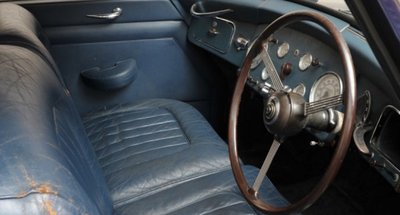 Geoff,
I think the three photos with the Dockers may in fact be the Sedanca De Ville show car, on theDE 36 chassis that was the first Docker show car, painted black and white or cream with matching front leather seats.
I'll have to check Daimler Days.
Cheers
Peter Grant
Top

I stand corrected, with " Daimler Days" beside me there seems little doubt; I should have checked it first!

MLW 580 certainly appears to be the 1950 DE36 sedanca in a different colour scheme, although it is difficult to be totally clear without seeing the roof open or the shape of the boot; I hadn't realised that the two cars were quite so similar. To confuse matters the registration number LXD 666 is shown on both the sedanca and the 1951 Gold car in publicity photographs. The most distinguishing features visible in these photos seem to be the lower body line - which is horizontal on the sedanca from the B post back to the rear of the car, while on the Gold car it rises gracefully rearwards as well as forwards of the B post, a very graceful line - the windscreen, which is flat on the sedanca and curved on the Gold - and the front wing air intakes, which protrude slightly on the sedanca, but are recessed on the Gold car.

The sedanca also has a prominent front windscreen chrome surround, in common with many other flat windscreen DE36 and non-coachbuilt cars. The Gold car may lack a chrome insert in its windscreen surround to begin with, but one does appear clearly in later photographs; this variation is also seen in other curved windscreen Daimlers of the early 50s, both coachbuilt and standard.

Photos in the "Daimler Days" chapters show that Hooper introduced curved windscreens across the range of Daimler body designs between 1950 and 52, as did Daimler on their standard cars. DB18 based cars and the Green Goddess DE36 cars had curved screens earlier, mostly with chrome inserts, before other designs adopted the style.

The really interesting thing about the Dockers and their tastes and lifestyle is that, unfortunately for them and for Daimler they were at least 60 years ahead of their time. Extravagant cars, yachts and destinations are still the norm for the really rich, of whom there are many more than immediately after WW II, but they paved that way. It is ironic that some of the things, such as the cars, associated with them are still regarded with suspicion if not derision in the UK, while their equivalents now - the high-end products of Rolls-Royce, Bentley and many other producers of luxury goods - are mostly admired for their quality. There is a disconnect in attitudes which is regrettable.