The really interesting thing about the Dockers and their tastes and lifestyle is that, unfortunately for them and for Daimler they were at least 60 years ahead of their time. Extravagant cars, yachts and destinations are still the norm for the really rich, of whom there are many more than immediately after WW II, but they paved that way. It is ironic that some of the things, such as the cars, associated with them are still regarded with suspicion if not derision in the UK, while their equivalents now - the high-end products of Rolls-Royce, Bentley and many other producers of luxury goods - are mostly admired for their quality. There is a disconnect in attitudes which is regrettable.

I agree that there is a certain market for vulgarity amongst what are today known as "celebrities" , but real money seems to regard modern RR products as irredeemably vulgar, and Bentley although arguably slightly less tasteless are not far behind. The last Bentley that seemed to have appeal was the Continental R of 1992-2004 or thereabouts, and even one of those provoked the remark/instruction from my wife " I've never seen anything so vulgar in my life and you're not having one ! " . We're still married after nearly 51 years !
Top

The car in bad condition in the garage that Barrie posted looks just like the Silverflash he posted a photo of earlier. Could it be the same one or were several silverflashes made?

...the remark/instruction from my wife " I've never seen anything so vulgar in my life and you're not having one ! " . We're still married after nearly 51 years !

That implies that you did buy one! Let's see a photo.

I think that most of the green goddesses are very stylish externally and not vulgar except the one with gold stars, but very vulgar internally.
Top

John B : sadly, no, I didn't buy one, although it was the only time she ever interfered in my choice of cars, except for a recent experience with a Rover 3.5 litre coupe which nearly ended in divorce ! The incident in question happened in about 1995, when I had tried a Continental R out to replace my 500 SEC on which I had done 300,000 miles in 7 years. Having been hugely impressed with the R's steam locomotive like torque, I took She Who Must Be Obeyed to the Motor Show, and there on the Bentley stand was a , wait for it, Metallic Tangerine Continental R with 2 moon roofs and with an interior of cream leather piped in cerise - it was my own fault really !
Top

Whilst tidying up my collection I found this: 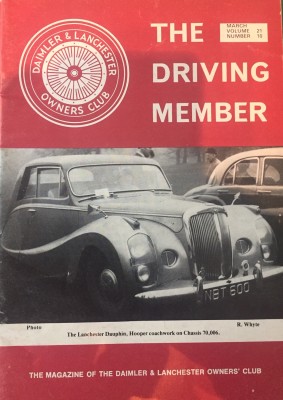 I wonder if it still exists as a Lanchester and where it is now?
Top

Hi Chaps OVC 444 now lives down here in Somerset, and the lower half of the Body Shell is now a much nicer colour.
Incidentally, this very rare Daimler is on display at the Footman James Classic Car Show being held at Shepton Mallet on the 22nd & 23 of June, on the DLOC stand,so do come along and visit us , free Tea & Biccys as usual !!

Thanks Al.
Regrettably I will not be able to see it but from what you say it would seem that it's had a radiator transplant. Is that the case or am I reading too much into your reply?
Regards. B
Top

Hi Barrie, yes as far as I am aware, from what Paul Galllegher has told me, some / all of these Daimler’s were originally badged as Lanchester’s, and were displayed at the 1953 Earls Court Motor Show in London , in view of the fact that the Company received no orders?, the cars were returned to the Daimler factory and rebadged as Daimlers.
Now whether their are One or Two still wearing their Lanchester Grilles I simply do not know, but I’ll bet my Bottom Dollar that somebody does

Knowing my penchant for anything Daimler and particularly Hooper Daimler,
a friend has spotted this and sent me pictures taken in a garage somewhere
in South London. 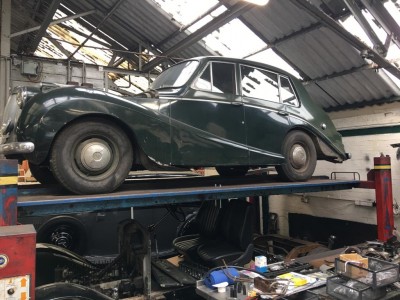 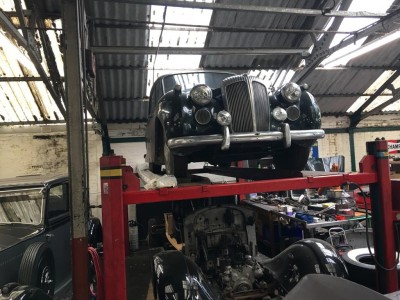 How nice to see a four-door DJ260 with a Hooper body still extant and being used!
The last one I saw was grey and at Beulieu Auto Jumble about 12 years ago.
Top

Gentlemen, Apologies foir my absence from the Forum for many months; I've been involved in organising the 2019 Annual International at Peebles Hydro in the Scottish Borders. But with that now behind us this is my first visit for a while, and v nice to see the topic on Hooper Daimlers still motoring.

The Empress style Lanchester pictured on the front of the old DM, NBT600, is the prototype LJ250 Lanchester Dauphin. It was owned then by F W Hutton-Stott the Lanchester historian. I know nothing of how it came to now be in the USA, but it is currently in San Diego and belongs to a man who found it in a scrapyard in the late 80s minus engine and rad grille. He restored it, reunited it with its grille, but was only able to find a strict Conquest engine to power it. We visited the owner in the early 90s and saw the car. He had made an excellent job of its rebuild. Curiously it has a bench rear seat fitted by the factory at the insistence of its first owner, although it had two individual rear seats originally.

OVC444 is the second Lanchester Dauphin that was changed to Daimler form by R E Smith, the general manager of the company when he made it his personal car. Personally I prefer the Lanchester grille, more substantial and more attractive. I believe that it still has the early Century engine that both the prototypes had with twin SUs but only 92bhp.

A further six DJ256 Mk I Century chassis went to Hooper to receive similar bodies, three with the Dauphin two door design 8396, and three with a four door design 8404. As some of you will know I have owned the first of those three two door cars NFS2 since 1994. A sister car was reimported from San Francisco in 1995 then disappeared to Eire until 2012 when it returned to the UK requiring complete restoration and was sold via eBay to eastern Europe. I've been waiting for it to reappear ever since.

One of the three four door cars is alive and well and belongs to a Club member. The first of the three four doors was a Royal stock car for a number of years and was auctioned in London in the 1980s I think, then disappeared. So two of them are currecntly unaccounted for. I'd be very interested to know the location of the garage where the four door car on the lift was photgraphed. It must be one of those missing cars. The third two door Dauphin' s whereabouts are also unknown.

That's a very brief history of the 8 Hooper bodied DJ cars. I'm happy to try to answer questions if there are any. The

The first photo chows NFS2 and the 4 door car together at Doune in june 1994, the DLOC international that year. 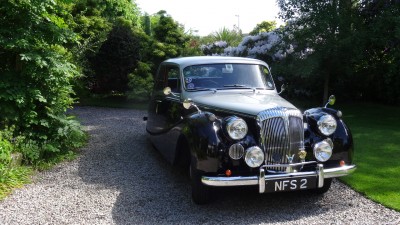 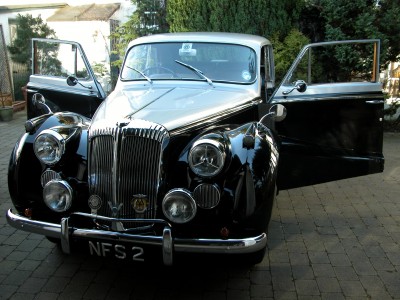 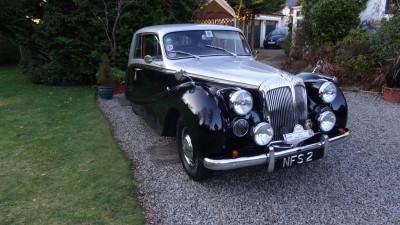 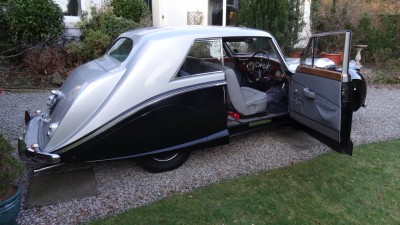