Al and John,
Forgive me for talking un-Daimler/Lanchester/BSA but I have recently bought an Austin Champ that stood for twelve years. Needless to say I have gone through a process of changing all things rubber. It is still pissing oil from the back crank seal which is a scroll type. I am going to adopt the catch it rather than cure it method until winter comes around and I can enjoy fixing. Now is the season to enjoy driving.
Colin,
I may be slow but I’m rough as well !
Top

hi let us know how you get on, maybe even copy my design of Oil catcher ??

Hi Chap, well found the answer thank goodness!! In my previous thread, I suggested that the Oil Restrictor that I had made May have been the cause of my dramatic Oil leak from the Rear Crankshaft Seal.
Well having removed the Restrictor from the oil feed to the Rocker Feed Union, there's practically no leak at all , save from the usual occasion drip which is probably quite "normal" so have refitted my "Oil Catcher" to keep Err indoors happy!
I do have slight leakage from some of the Nuts on the underside of the Gearbox, so have just purchased a quantity of Copper Washers hoping this relive the problem , I really wanted to fit Dowty Seals , but our local supplier did not carry them unfortunately.
So more good news , HS2 SU Carburettor arrive yesterday and it looks superb ! I have also finished making the SU Carb Adaptor , and is now in the hands of a friend of mine who will Silver Solder the joints, then it will go to my local "Plating" works to be Cadmium plated.

The oil feed to the rockers is fed off the oil gallery by an external feed pipe. On the 1203cc engine, prior to Al's 1444cc one, at the cylinder head end of the pipe there is an adjustable screw to regulate the flow to the rockers. Without taking the one on my 10 apart, I am pretty sure the adjustment is from 'full' to 'less full' as opposed to nil.
I've noted that on my LD10 there is no adjustment at all, it is purely a union which alliows a copious flow through.
Having read the general location of Al's leak, this pipe appeared to me the most likely source of trouble but I didn't know about his modification.
I suspect that the pipe's unions are not containing the reduced oil flow under increased pressure leading to the leak. The overall pressure in the oil system will not have been affected but the pressure building up in the pipe could be considerable.
I have taken the liberty of writing this reply because had I not had more than one car with this general arrangement, I would not have been aware of the detail differences they made over the years.
Top

Hi John & Simon, all the time I have owned my” Eleven” which is 41 yrs! The Banjo Bolt at the Cylinder Head has always had a short Screw inserted , and this is the first time I have removed it.
I was certain that I had seen such a Union with some sort of adjusting Screw in it , so like I said , because of what “Seemed” to be too much Oil up at the top of the Cylinder Head, I thought that I would attempt to reduce it , with the afore mentioned results.
In my own and Geoff Millington’s opinion’s , it did seem obvious that by restricting the flow, and by the way, I had no idea how much I had reduced the flow, this was the reason that the Rear Main was receiving too much Oil for the Scroll Seal to Handle , thus causing the substantial leak .
Now all is back to “Normal” now with just the occasional drip, as an aside, I do have a slight leak from Two of the Setscrews in the bottom of the Gearbox, I had fitted Dowty Sealing Washers under the Screw Heads, but the leaks have still persisted, so have now degreased the Threads and applied Loctite Thread lock , be interesting to see if this works ....

Ps No knowledge of Oil pressure as no Gauge is fitted , only an Oil Warning Light
Top

Hi Chaps, pleased to say that I am recovering very well from my recent medical problem, which was actually a very serious case of Diabetes , I was actually much worse than I could have realised, but on the mend now

Over the last few months, many of you will know that my Lanchester had been suffering from “Over-fuelling” and I and other Engine problems , and was seeking a suitable replacement Carburettor.
I had hoped to purchase an SU SV2 as fitted to the 1936 LA10 (. 1444cc Engine) this initially proved almost impossible to find, so I purchased the modern equivalent an SU HS2 ( Mini Cooper ) and purchased the correct Needle from Burlens Ltd , this of course involved producing adaptors to enable the new Carb to be fitted onto the original Inlet Manifold , also incorporating the original Air Silencer, which is also athletically pleasing.
Well I have to say, that the transformation in performance has been amazing, the Engine seems to have much more power, and acceleration has been improved no end.
So all in all, it’s been a very long road ( In more ways than one !! ) but I got there in the end !
Hear is a photo of my “New” Carburettor . 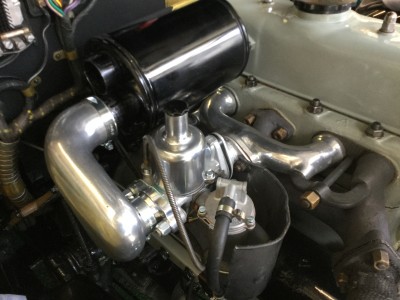 I know that I have in the past been very keen to keep my Lanchester as near to original as possible, but after a lot of research, I realised that my car had been wearing the wrong Carburettor in my 41 yrs of ownership !
So to fit another “Wrong” type of Carb , didn’t seem to be a big issue,!,

Alan, I'm glad you're much better now. Enjoy the rest of the summer and just drive the LA11 for fun! The new carb looks very smart and I'm glad it works well.

The question has to be asked - what do all the other LA11s do? Are they all suffering the same problem with a replacement Solex or have they managed to keep their original SU carb?
Top

Hi John, good to hear from you again, well the LA 11 was originally fitted with a Solex “ Thermostarter “ Carburettor that incorporated a Temperature actuated Choke mechanism , which was apparently pretty ineffective , and most were consequently replaced, as in the case of my own car .
As I said, since my “ latest”:rebuild, the Engine is almost “ Ghostly” quiet , especially when Ticking Over in Gear, many of my friends have made very favourable comments and are very impressed ! ! So nice nice to have seemingly got it right after such a long journey !,
I shall be attending the Sherborne School Concourse at the ent of this month, so would be great if you are able to get there ?

Oh, as an aside, the application of Thread Seal to the Cylinder Heads Studs, and also coating all the Stud Holes and the edges of the Head Gasket with Petrol Tank sealant, seems to have stopped any signs of leakage I’m pleased to add

it's good to hear you're on the way of recovery.

And it's good to hear you've managed the problem of leakage. We've sealed the threads of the studs and stud holes with Loctite Thread Sealing Liquid. Our actual result is, the threads are sealed and at the moment there's no hydrostatic leakage. But this situation is a static one without running the engine.

Fortunately two weeks ago I've got a new Payen cylinder head gasket for "Little Fifteen" so that my son and I are able to fit the cylinder head again for the third time and are full of hope to get a no more internal leaking engine. But sadly this job will be not until October, when the classic car season 2019 is coming to end. I'll update you.