Hi, well having found nothing wrong with the Piston Rings etc, I turned my attention to the Cylinder Head, probably should have done that in the first place, but I was convinced that I had broken the Oil Control rings on One or more Pistons, when I rebuilt the Enginge after fitting the new Piston Rings.
I then turned my attention to the Cylinder Head that I had been given by a mate of mine, which was “ Supposed” go be in good condition !
I removed the Inlet Valves from the Head only to find that all were awash with Oil. ! !
I the had a chat with my old mate Geoff Millington , who as it happened, did barate me for not taking his advice to suspect the Cylinder Head , prior to me stripping the rest of the Engine !!
Well Geoff firmly believes that the Cylinder Head has a crack internally allowing Oil into the Combustion Chambers, He has known this phenominomm to happen before when the Valve Guides have been replaced , being forced in with too tight a tolerance, which then causes the Cylinder Head to fracture internally.
My oppinion now, is that the Knocking noise that I experienced ,was more than likely due to the Oil being compressed between the Cylinder Head and the Piston , which made the Engine sound like a Diesl Engine , probably causing the Pistons to Hydraulic .
I also found that Three out of the Four Valve Stem Seals that I I fitted on th earlier build had virtually disintegrated , probably due to their being old stock.
Fortunately , I have been given another super condition Cylinder Head, again kindly donated by the “ Wonderful” Geoff Millington ,this has been fully refurbished and will of course be fitted on my next !! ! Rebuild 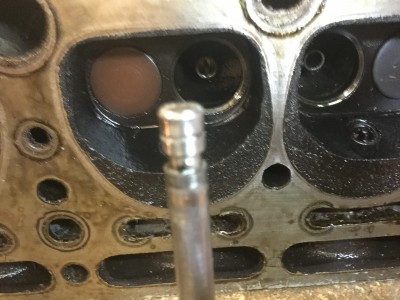 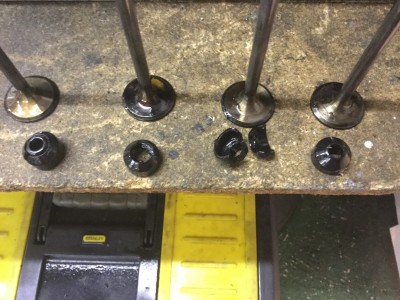 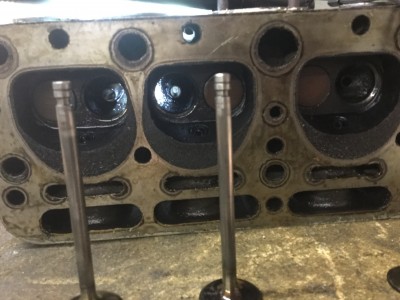 Alan, that's great news at least you have found the answer, keep us updated if there is anything else we (me) need to know for future reference. thanks Ton
Top

Hi , well I thought that I had found the answer, But ..... Ian Cox is certainly not convinced, I have actually sort of pressure tested the Oil supply tract in the Cylinder Head , by blanking the Cylinder Stud hole on both sides of the Head, I then filled the cavity with a thin fluid and pressurised the head via the Oil supply hole , but was unable to make or find any leakage, Ian is going to recheck the Cylider Bore size to make sure that they are ok , I may need to purchase a new set of Pistons , but really at this time we still have no idea what’s causing the Oiling problem .
It almost seems like the Pistons are actually pumping Oil up to the Cylinder Head ! Ho- Hum
To be continued ............

Hi Chaps, taking the Lanch Engine over to Ian Cox on Monday morning, he is going to carefully measure the Bores, and Pistons to try and solve the problem of the Combustion Chambers being soaked in oil,
Really unable to see anything obvious as to why this should be happening, I do have a couple of ideas though,
one that the Cylinder Bores have been made Oval by the Pistons being fitted with the wrong sized Rings, allowing them to tilt in the Bore causing uneven wear,thus allowing Oil to By Pass the Piston Rings, or of course, it may be the Pistons themselves which are showing signs of wear, I guess we shall know more on Monday

Ps , Any of you boffins out there got any ideas please .? ?

Hi Alan, this might help or not, but I had a sort of similar event on my newly rebuilt daimler V8 engine but without the noise you describe, all 8 bores were really wet with oil and producing a vast amount of oil smoke and worked out the induction stroke was sucking oil from the rocker area thru the valve guides? I watched one bore area while running the engine and saw a drip of oil every 2 sec on every one, but why did it do that, after checking the oil pressure and was found to be within spec with a mech gauge the only way I stopped it was to fit oil seals onto the inlet and to a lesser extent onto the exhaust guides, it might be that my rebuilt v8 engine was very tight when doing the compression test even though the rings had yet to bed-in, it did settle down after that but still produced an oily plug now and again. after checking the oil pressure and was found to be within spec, the only other idea I had was that the heads themselves were porous around the hemi area of the head, but that would have produced water vapour as well. and you already dismissed the the head being below skimming spec. Tony
Top

Hi Tony, great to hear from you again, well just had a very long conversation with the Lanchester “Guru” alias Geoff Millington, as usual it was one of those “ Around the houses” conversations , where we re visited most of the ideas already mentioned, still have a slight incling that the Head may be suspect, and of course Valve Stem Seals were discussed at length , will probably go for an “ O” Ring conversion rather that the Ford Escort Top Hat Type, that I fitted last time, this is partly due to the fact that the Broken Seals were sitting on top of the Valve Guides and may have been instrumental in allowing Oil to accumulate around the Valve Stem.
Have got a rebuilt Cylinder Head ready to fit, but have still to confirm that the Cylinder Bores are perfectly round and not oval ! As I said , the Pistons have quite bad surface wear and maybe were the cause of the extreme Piston noise , if both Bores and Pistons are found to be out of limits, I may even have the Engine Sleeved and then fit a set of “Standard” Pistons .
Lots to think about, and no doubt we will have further discussions on the best way to sort this problem !,

To add to that Tony, if new valve guides are fitted to the V8 there is a strong chance that the aluminium tears and the press fit is not air tight. In effect oil runs down the torn area outside of the guide and into the inlet port. The cure is to put sealant under the valve spring cup or press the guides in with some form of retainer like locktite.
Do you think that may be the problem with your motor Alan ?
Colin,
I may be slow but I’m rough as well !
Top

Hi Colin, well the Head that I fitted last time to be honest was an unknown quantity, but it’s so difficult to know where to go now, as I said, could be Cylinder Head leaking Oil into Combustion Chambers,and Piston Noise being caused by “Dieseling” .
Piston noise being caused by wear in Bores , or because they themselves are worn !!!!.......
the conundrum continues!
Top

Yes Colin, my guides were sealed using locktite bolt-fit, and as always modern oils can increase the leak problem, but not on Alan's motor as I think he used the correct lube etc, but this is deeply concerning and I find it hard to fathom why Alan's engine has behaved this way, from a simple over-fueling issue, but anything mechanical can put us in our place, and maybe the fuel issue was just co-incidence, it's the oil issue that's hard to work out, unless the oil pressure is way too high, but on the lanchester the oil pump isn't a high pressure system is it? it's all about flow rates around the engine I think, and not sure if the oil pump has relief valve fitted tho.Tony
Top

Did you do a compression check on the engine?

Is the crankcase breather system working ok (no blockage)?
Andy