I am the proud owner of a 1954 Daimler Roadster with a Wilson preselector gearbox. I am wondering if it is possible to fit an overdrive to the car. At present when I am doing 70mph I am doing over 3,000rpm - much to high!
Any advice would be much appreciated
Thanks Ivar Hellberg
Top

It’s funny how our opinions have changed with modern motoring comparisons.
When the car was new, the chances are that it hardly saw the need for an overdrive. Modern driving tends to see loads of motorway type roads which seem endless if cars rev highly. And yet we all moan that it is impossible to drive anywhere without being held up due to overcrowded roads.
I can understand the wish though for lower revs. I have a Honda S2000 which sits at nearly 4000rpm when cruising at motorway speeds. It does rev out to 9000 rpm though. I also have a V6 Audi which cruises at 40mph per 1000rpm in 8th gear. The Audi is the preferred vehicle for distance.
Colin,
I may be slow but I’m rough as well !
Top

I think these cars were not meant to cruise along at 70mph, they were not Sports Cars.

The brother of the first owner of the New Drop Head Coupe that I owned told me that "It was a Gentleman's Cruiser which purred along at 50 to 60 effortlessly" .

I think this is the speed that they should be driven at.

Thanks for your suggestions. Your are right about not having motorways in the 1950's so overdrive was not needed. My Roadster has the Westlake engine, so I think it needs an overdrive, not least it would save on the petrol. The car was built in my father's factory at Carbodies and it was designed to be a grand touring car (plenty of boot space of the ladies!)
My question is whether anyone has successfully fitted an overdrive on a Conquest series pre-select gearbox, as I would like to fit one?
Ivar H
Top

I was talking to Graham Butler recently and he said he had intended to fit overdrive to his Daimler 15. He recently sold the car without carrying out the work but he had acquired all the parts needed to do this. He used to work for Laycocks in Sheffield who made overdrive units. He says you need a self contained unit between the gearbox and the back axle. An inhibitor switch to prevent accidental engagement in reverse would need to be devised. So I would say it was possible but I don't know if anyone has done the work.

Try asking Overdrive Repair Services (ORS). They are based in Sheffield and are ex Laycock employees who I believe now have the rights. I can highly recommend them after they overhauled my SP box and fit an overdrive to it. They can supply and they have a fitting service. I found them to be reliable and priced reasonably.
I imagine they would be aware of anything that has been fit to similar applications.
Colin,
I may be slow but I’m rough as well !
Top

It probably won't be a cheap exercise. I have read of a couple of companies that supply an overdrive unit that will fit between the gearbox and the rear axle independently of the gearbox unlike more traditional overdrives that were closely coupled to the gearbox.
This is one company: http://www.overdrives.co.uk/index.html . Although they major on Rolls Royce it could be worthwhile enquiring as they claim to be able to supply other marques.
This is another one that provide a conversion service: http://www.odspares.com/ . On their conversion page they provide dimensions so you can see if you have the space to allow one to be fitted.
Overdrive Repair Services mentioned earlier also do a retro unit, priced at £1,000 - £1,200 https://www.overdrive-repairs.co.uk/pro ... =Overdrive.
There may be others.

Colin's earlier comments regarding the need for overdrive prompted me to look when it was first used and the history here: https://www.overdrive-repairs.co.uk/about-us.php is interesting. First introduced in 1948 on the Standard Vanguard. Then fitted to many other marques, usually the more up market ones, some mentioned on that page others not. I once had a 1960 Vauxhall Cresta with overdrive and I think it was also available as an option on cars like the Sunbeam Rapier. Even in the crowded South East and before the M25 was built there was plenty of opportunity to use overdrive for comfort on the major A roads like the A2, A3, A25 and so on.
I think the desire for lower engine revs for economy and for added comfort has long been seen and desired but for many years, even decades, the manufacturers were too slow to respond, sticking to the direct top mantra resulting in many cases high engine revolutions at speeds of 60 or 70mph. As an example, even into the early '80s (e.g. the first generation Vauxhall Cavalier or Astra) most cars still had only 4 gears, it wasn't until the second generation Cavalier and Astra did the 5-speed gearbox with an "overdrive" 5th gear begin to appear. I'm not sure if that was inertia or cost related. Most likely though inertia - it wasn't done "because the others weren't doing it" there was no competitive need.
Overdrive wasn't always done for sporting reasons although in the case of the Austin-Healey or the Triumph TR range it probably was. But big Jaguars, Armstrong Siddeleys, Bristols and Jensens weren't sports cars, they were luxury cars where overdrive would be added for comfort.
Top

Graham Butler has decided to sell his unused Laycock stand alone overdrive unit along with the chassis rail he purchased to mount it to his Daimler 15.
If anyone is interested please contact me. 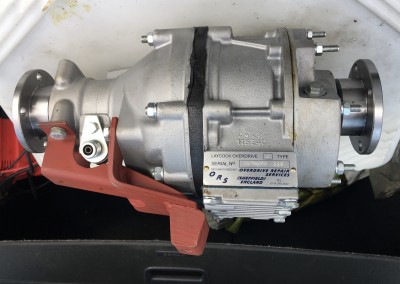 Hi Everyone,
I drove a Roadster some years ago and the owner said to drive the car until I felt it had hit its sweet spot without looking at the speedometer and only when it had hit that sweet spot to look at the speed. I did that and it was 80mph.
So at least that particular vehicle was happy cruising at a high speed and I didn’t find the engine revs to be an issue.
My Special Sports has the overdrive fitted as an integral part of the gearbox and I sometimes wish that Daimler had instead fitted the Laycock system and kept the four speed gearbox as the car really misses 3rd gear especially up hills.
I hope that the after market system could be successfully used, it will create an extraordinary touring car.
Peter Grant
Top
Post Reply
10 posts • Page 1 of 1