Hello
Today I finally fitted the new viscous coupling supplied by Manners back in May, a straightforward job completed without too much fuss or necessity to remove fan cowl or anything else, but......

Take a look at the pics ,the old and new parts differ quite a bit and it seems the new one is temperature and not speed controlled (see temp sensor on forward flange) as I understood should be the case. The new coupling also comes with an adapter bush to enable fitment to smaller diameter pump shaft than boss diameter in coupling, this was made aware to me when ordering but not the fact that a temp sensor is fitted.

According to the packaging it's for the XJ series but it all fits nicely with not a hint of it or the fan coming into contact with anything, hopefully, the distance from driving flange to fan seating face is identical on both units.

Perhaps this is an improvement on the original?, or was the removed coupling the wrong type? Anyway, as long as it keeps the engine cool and the fan doesn't roar the whole time I'll be happy as it will be a nice change from keeping the heater on full blast on hot days to keep temp in order! That said the temp only climbed a little in traffic but that is too much for me.

I should add that I have cleaned out a hell of a lot of debris, mainly old casting sand and general crud from the block (mainly back end) during top end overhaul. That was one hell of a messy job performed from below via cylinder block drain holes and high pressure hose with taped on thin aquarium piping before heads were removed but I am hopeful it will bring some improvement.

Thanks as always for any ideas. 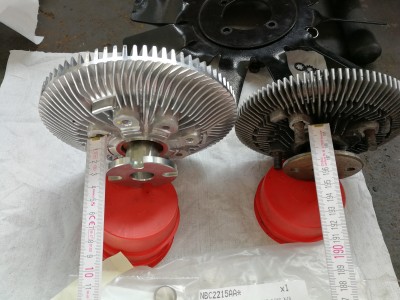 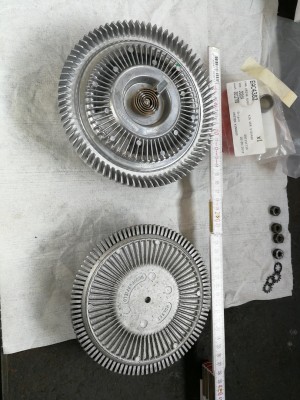 The only thing to be aware of with the longer unit is clearance to the radiator if your engine mounts are not up to scratch. If they are as soft as bogies then under sharp breaking the engine will tilt forward and cause contact between the fan blades and radiator.
Colin,
I may be slow but I’m rough as well !
Top

Many thanks for the replies.

Col, I have about 4 inches clearance between front of coupling, which is forward of fan, and the radiator. I have new engine and front chassis side member mounts so I would be very worried and a little disappointed if the fan and/or coupling came into contact with the rad but point taken!

Your comment Chris S is very encouraging and I look forward to trying it out when the heads are back on and its up and running.....probobly next spring now!