Good pictures Mark. It looks as if Appleyards has turned into a car wash and shopping warehouse.
I wonder where the town planners where when that happened?
More on coupes from me:
I've posted this car before but not this view which gives a better idea of what the creator had to work with. 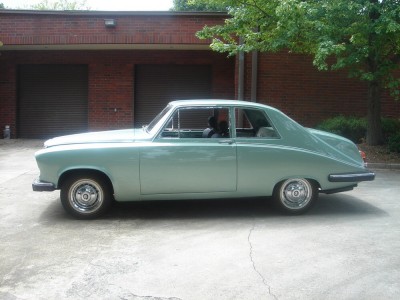 This has also had some time spent on it too. 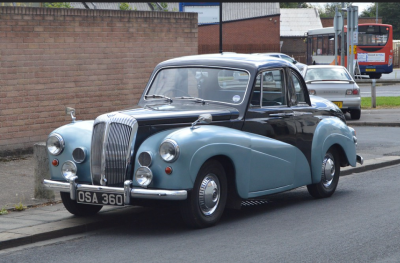 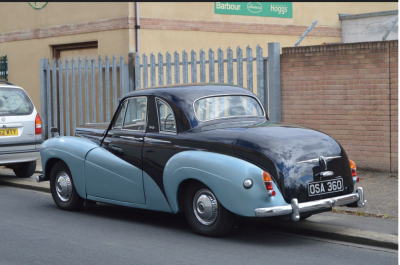 Personally I think wing-mirrors are a mistake.
Below has mirrors in the proper place but I never understood why this 3 litre
didn't make it into production as a replacement for the DB18 Special Sports. 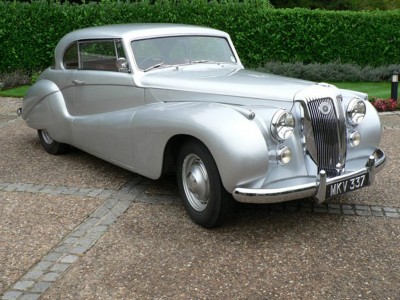 Neither the Conquest Century Roadster nor the subsequent Convertible ever really captured the market.
This was probably due to the competitor Jaguar XK120 and its 160bhp versus the Daimler’s 100bhp 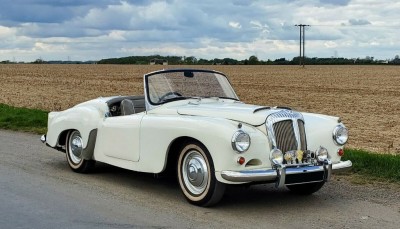 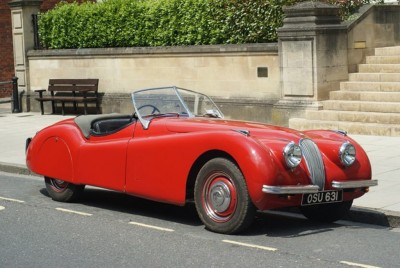 In theory the power shouldn’t matter as the less powerful and similarly configured Lancia is highly sought after and currently on the market at c.£160,000 whereas Jags are c£90,000 and Daimlers £30,000. Although Daimler has rarity on its side it's appeal is limited. 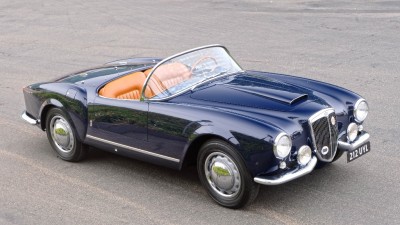 In the Early 50’s Bentley toyed with the idea of a roadster called the Bentley Blizzard (awful name!) which was a two-seater version of the Bentley MkVI.
Bentley never took it beyond the planning stage but entrepreneurs have now recreated a limited edition of 15 cars at c.£750,000 each (They hope!)
On the one hand it's vexing that Daimlers don't make the money but at least it makes them affordable. 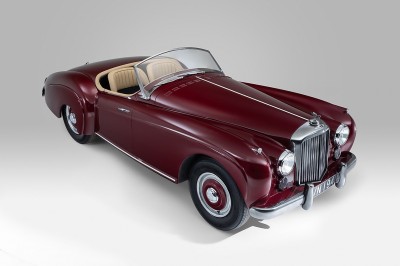 I am sure it's all about looks. The Lancia is to die for, Jag very British, very desirable. But the Daimler looks like it was designed by a committee rather than one man. Too many stylistic bells and whistles, as if they couldn't let go of the 50s.

As for the Blizzard, and it's modern counterpart, no comment.

I do enjoy this thread!

Thank you Mark! More contributors to dig out those old photos please.
It would be nice to construct an informal history of Daimler from old and personal photographs.


I have an obsession about dashboards.
I'm sure everyone has seen the leather-clad (or is it Rexine?) dashboard of the Conquest Roadster. 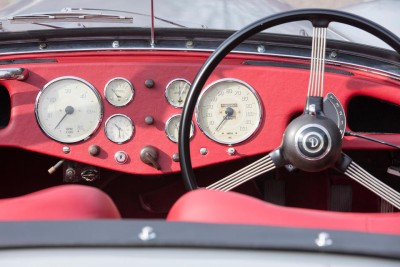 But did you know that there was a wooden version?
I'm afraid I can't show you the picture as it's from a protected source that wants paying ££s to reproduce but I can give you the link.
https://www.alamy.com/stock-photo-1955- ... edoptin%3D It's Norman Wisdom's car. I'm not sure if it's a one-off or an option.
Perhaps someone else has a clearer picture they can publish or provide any further information?

Here's a fellow who deserves a round of applause for his enterprise in creating his own wooden dashboard. 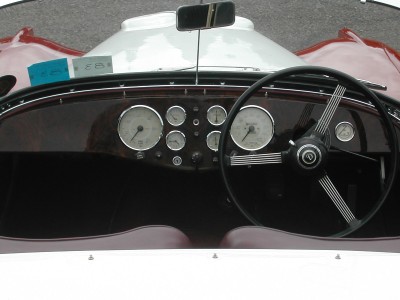 Barrie and other contributors

Apologies, I've not visited the Forum much this year and have therefore lost touch with many of the threads including this one. I thought that the entire 'Hooper Daimlers' thread from the primary non SP/V8 250 section had been transferred to this section but I cannot now find it here so I must have been mistaken. However I can identify several of the cars of which you have photographs and have uploaded here, for example the two-tone green Hooper DB18 drop-head which belonged to David & Marie Adcock for many years until their deaths (David first, then Marie). As it has not changed hands since I assume it remains in the family, although it doesn't appear to be being used currently, which is a shame; unless anyone has more up to date news of it?

The DB18 Barker SS fixed head coupe belonged for many years to David Beales, who was Joint DLOC DB18 registrar with David Adcock for some time, and I assume it still does, again unless someone knows better? I thought that there was only one Lady Docker DB18 Hooper special fixed head coupe, as pictured in Brian Smith's 'Daimler Tradition', for a long time, but I was clearly wrong because there is at least one in the USA and possibly more than one in the UK unless the one photographed by you is Lady D's original that I believe is still hiding somewhere in Cambridgeshire? Hooper's typical cinema style tip up rear seats were to be found in those, all the Green Goddesses I believe, and the two original Lanchester and three Daimler Dauphins, although the first Lanchester Dauphin NBT600, now in San Diego, has a bench rear seat which was fitted at the insistance of the first owner Mr Waterhouse (? PWC?).

The green Hooper 4 door Empress style car on the lift in a London garage is fascinating, because it is either the second or third DJ256 based 4 door Empress. It cannot have been a DJ260 as described when it was first posted, because all six Hooper Centuries were pre-select Mk I's made in 1954 or 55. The first of the three 4 door cars, with Hooper body design no 8404, had rectangular cabin air intakes in the front wings and was a Royal Stock car originally. The second also had body design 8404 but nothing is known of it unless it is the one in your photo on the lift. If it is not that one then it must be PYM939, the third car with body design 8404a and round air intakes, which is currently for sale as I've already noted in the for sale section. 8404a has wider rear doors with very narrow B posts compared to 8404, so narrow that the car was fitted with flashing indicators from new instead of semaphores since there was no place to put the latter.

I'll go back through all the photos to see what else I can find.

I was wrong! The 'Hooper Daimlers' thread was moved to the photograph album, as I've just re-discovered!

Hello Geoff, thank you for your detailed response.
I’d forgotten about David Adcock’s involvement and knew him briefly as a fellow enthusiast. I first came across the car before David and Marie owned it at a Daimler rally in Syon Park, 1972 or 73 when it was owned a very pleasant, fastidious man whose name I did not record. I hope it hasn’t vanished and is seen soon. 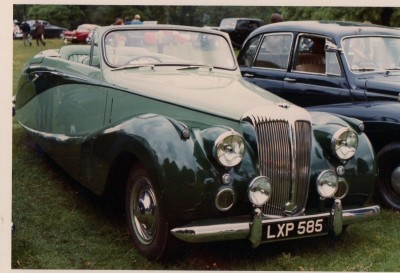 I’m puzzled about the number of 2 door Hooper DB18s. I went to see one when it was owned and being sold by Alec Norman and I seem to remember being told by him that it was one of three. It’s a shame there is no definitive written work on the coachbuilt Daimlers or maybe I ought to go through all the Daimler books I have and try and work it out!

You seem to say that there are five Dauphins: 2 Lanchester and 3 Daimlers.
I thought there were 3 Lanchesters made, two of which had Daimler radiators installed later to make them saleable. These are the ones I know of: 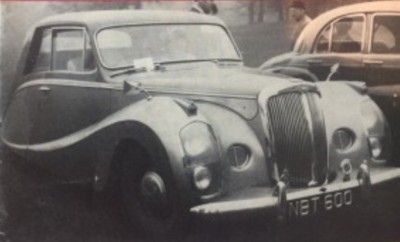 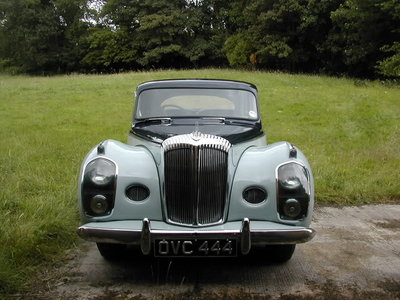 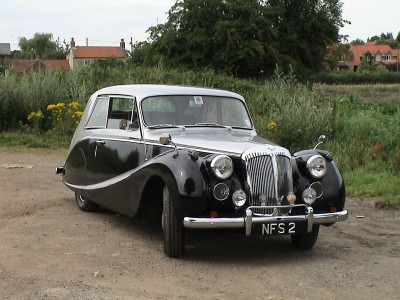 I thought there were 3 Lanchesters made, two of which had Daimler radiators installed to make them saleable. There were no Daimlers originally. These are the ones I know of:
Let me know if there are others or have I misinterpreted your post?

Talking about San Diego do you know anything more about this car? In about 1980 I sold my Bristol 410 to an attorney named Joe Dickeson who lived in Santa Barbara California (not too far away) who told me that amongst his cars was a four door Hooper Daimler on the Conquest chassis. I wonder if there is any connection? A long shot I know.

Let me know if there are others or have I misinterpreted your post? 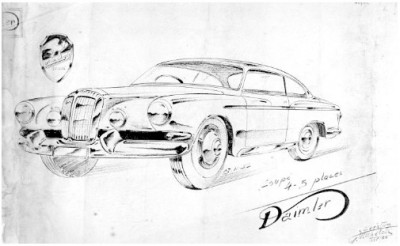 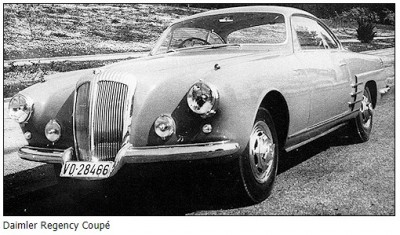 Giovanni Michelotti did these two sketches for Ghia-Aigle of Daimlers in 1955.
Top

Thanks for the sketches Mike which I hadn't seen before.
The top one is stretched and exaggerated as was the fashion at the time but the bottom one looks like a Vauxhall Velox of the period.
You can clearly see where the inspiration came from for the VW Karmann Ghia 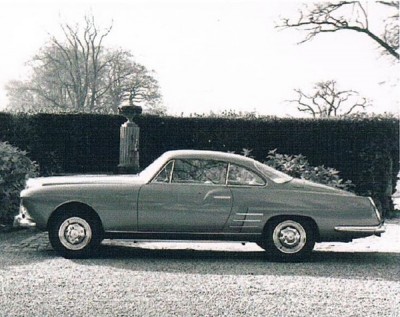 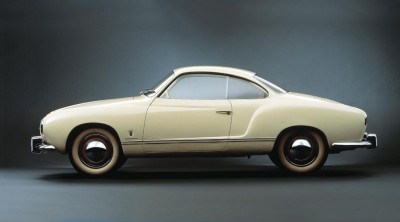 The Karmann Ghia went on to be probably the most successful ever 'coachbuilt' car and there is still a huge and thriving restoration industry for it in USA.
This is despite being the anti-proverbial 'sheep in wolves clothing'
The Daimler however never caught on and there's a paucity of information and pictures.
Top
Post Reply
42 posts