Descriptive and in-depth articles on how to do repairs or restoration. (Wilf's articles visible by forum members only).
Post Reply
8 posts • Page 1 of 1

HI
An attempt to upload an article. Some of the suppliers may not still be in business 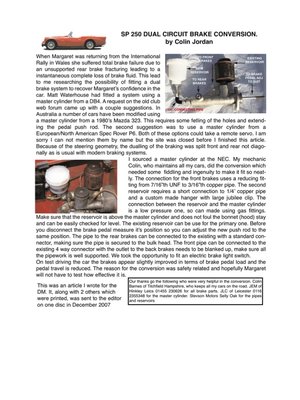 The word is brakes, not breaks
Top

I think dual braking is a worthwhile modification, having needed it on one occasion!

Hi Dave
I bought the master cylinder at the NEC so I did not get a receipt, cast on the side is 1.22 and A & B on the outlets. However if you try the the supplier I named he claimed he had provided quite a few. It definitely came off a P6 Rover european export model. I think it's from a 3,500. The Mazda ones were used in Australia and I have no idea which model. Whilst the Rover fits with out modification the Mazda one needs some alteration to the holes and the rod length. I have no idea about the DB4 fitting. I found the P6 club very helpful and the gave me a diagram for fitting a servo if required. We did not use it but I enclose a copy below.
To Dexter
I am glad you found 1 of the deliberate mistake what happened to the rest?
Regards
Colin 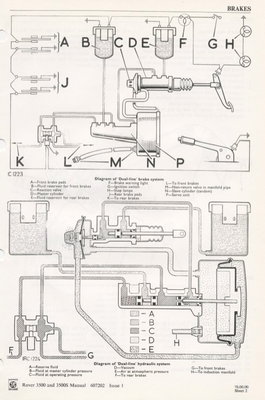 Hi
I have just looked out close up of the master cylinder which I attached. I should have mentioned that the fitting and balancing of the P6 servo System is a bit of a pig to do. We have not found the need for a servo even in our advancing years.
Regards
Colin 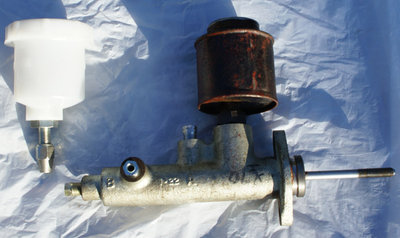 I am investigating converting to dual circuit brakes and have read the articles by Colin Jordan & Matthew Waterhouse plus researched the Old Forum where there is a lot of info. Some of the SP guys here in Oz used a Mazda 323 tandem mc but it required some machining to make it fit. I see that SteveW62 & Dovr both used a mc from a Datsun 120Y - hope they read this - but I don't know whether it required any alteration to make it fit, ie do the holes line up for fitting? It is also 11/16" rather than 3/4" - does this matter?

The Datsun unit is a direct swap, the only mods were to improve access to the bleed nipples on the side. The smaller bore gives slightly more pressure to the caliper (non servo system).

I think the pipe threads are metric, which wasnt a problem as it needed new connections.