Hi Chaps, just another quick update , well, filled the cooling system yesterday, any of you who have had to remove and re-fit that Bottom Hose Casting will no doubt sympathise with me on what a fiddly job it is, I had to remove it and make a thicker Cork Gasket to stop the blooming thing leaking!

Well having sorted the leaks, I then filled the Sump with Comma 40 Grade oil, I then disconnected the Coil wire, and pressed the Starter Button until the Oil light was extinguished, only to find that there was a leak from the Oli Filter connection!
On removal, of the offending Pipe, I could see that the Pipe had fractured just beside the Olive, fortunately there is sufficient Pipe , but have had to order a 3/16 Dia Olive from a local Hydraulics company, which should arrive in the next couple of days hopefully! !
Here are some pictures of the Engine after installation, and also one of the offending Oil feed Pipe . 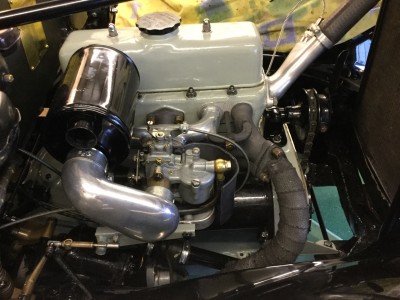 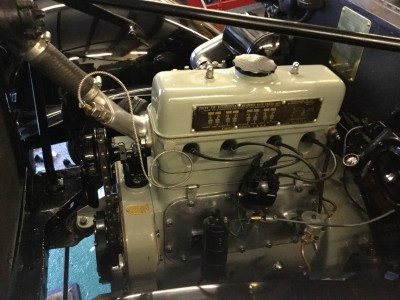 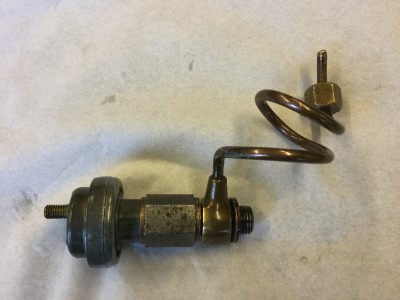 Hopefully should have her running again in the next few days

Hi, to my amazement, the 3/16 Dia Olives arrived this morning, once fitted, I proceeded to start Engine for the first time after its complete re-build, she started first time and sounds lovely , no leaks, no nasty noises, just need to sort out the electrics for the Electric Cooling Fan, which seem to have disappeared somewhere

Cox & Turner gave the Cylinder Block a Chemical clean, and Ian Cox was amazed by the amount of Crud that came out, I had her running for Two lots of Twenty mins or so, and the Water Temp didn’t even reach “ Normal” so it looks as if that clean has done a lot of good, although I am inclined to temporarily fit my new electric Gauge , just to compare it to my original that was overhauled by Adrian Sidwell recently.

Amazing ! Two members to be congratulated for persistence the same day!

I'll repeat what I said to Larry ( agnello11 ): Now enjoy the summer and go to as many shows as you can!
Top

Hi Al,
Just wanted to thank you for sharing with us the journey you went through. I admire your positive attitude throughout. I tend to be a little more dramatic when things go wrong

Hi Chaps, many thanks for putting up with my almost daily Diatribe ! and yes I agree
, it certainly has been a bit of an epic “Voyage” to say the least !
I was hoping to place a couple of videos recording the Engine before and after the re- build, but apparently , the files are too large, which is a shame

What I can say however, is that I am absolutely delighted with the result ,

Well Done! and a very smart paint job on the engine, take the old girl out this summer? keep us up to date with anything else to do with the "running in" period. tony
Top

Hi John, still not entirely confident that the Temp Gauge is working correctly, will not really know until I get the old girl out on the road.
Still need to re-fit he front Floor& Carpets, Bonnet etc, and while she’s up on Axle Stands, I intend to remove all of the Brake Drums and give the “Workings” a good clean etc, and also give the whole underside a good clean and Wax Polish

Hi Chaps, a quick update, well have done 30 miles with the rebuilt engine, and very pleased and relieved to say that it sounds superb !
Only had a couple of issues, slight leak on one of the Hose, and an Oil leak from the Timing Cove Gasket ( My fault ! ) see piccy below 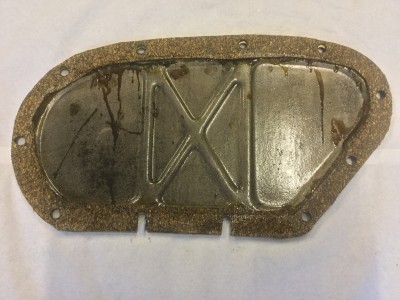 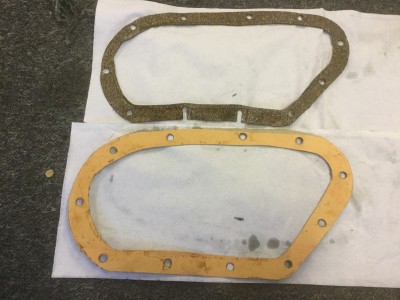 I stupidly cut out Two Slots at the Bottom and of course that caused the Gasket to leak !,
Oh, and now the Petrol Gauge Sender has decided that it doesn't want to “ Send” anymore, so if you’ve got one spare please do let me know .
Temp Gauge is working fine, it’s reading lower than previously due to the Engineering Company having given the inside of the Cylinder Block a through Chemical clean, Ian Cox did say that there was Crud nearly half way up the side of the Bores , even after climbing a hill the Temperature only reached just under 170 Deg, then dropped when on the flat, so I’m very pleased with the result!
Still looking for an HV2 Su Carb ( As fitted to the later LA 10s with the 1444cc Engine ), so if you’ve got a spare one for sale , again please do get in touch on the Mob No below,

Hi Chaps, have now done 85 miles and no real problems, apart from that wayward Tank Transmitter, which for some strange reason decided to actually work yesterday !!
I'm still concerned about the fact that the Engine appears to be running too rich, its strange, that when I use the Gunsons Colour Tune, when increasing engine revs, the colour in the combustion chamber is Blue as it should be, but when the engine is on tick over, the exhaust always smell very rich!
I'm concerned that the engine may suffer from Fuel Wash, hence my plea for an HV2 SU Carburettor, as fitted to the 1936 LA10 with the 1444 cc Engine, so if anybody has a spare one that they are prepared to sell me , please Do get in touch. 07713-673230 (Mob) or 01935-420168 (Home)